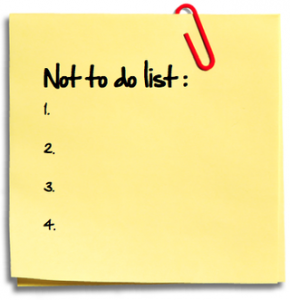 As many of you know, I spent a good deal of time on the road last year. Sixty-three trips, to be exact, but who’s counting?

During that time, I had the grand opportunity to get to know the way our government runs airports intimately well.

How should I say this? It, well, sucks.

From people standing around at security while hordes of people wait in line to not being able to read your tablet in airplane mode during takeoff and landing, it’s a huge mess.

Of course, the more you travel, the easier it is to spot the loopholes and soon you’ve weaseled your way through the airport without so much as a second glance.

I always joke that if a terrorist really wanted to take down another plane, all he’d have to do is achieve status with an airline, buy Global Entry, and spend time in airports to find the loopholes. It’d be expensive and take some significant time, but it’d work.

It’s for this very reason, Seth Godin’s “Eleven Things Organizations Can Learn from Airports” spoke to me.

From his headline, I thought he knew something I didn’t. I read it and realized we completely and wholeheartedly agree. It’s a blog post about the things organizations should not do.

I shortened Seth’s list a bit, but the point is there is a lot you can learn from airports – and not just in the U.S.; this is a global problem – about what not to do in business.