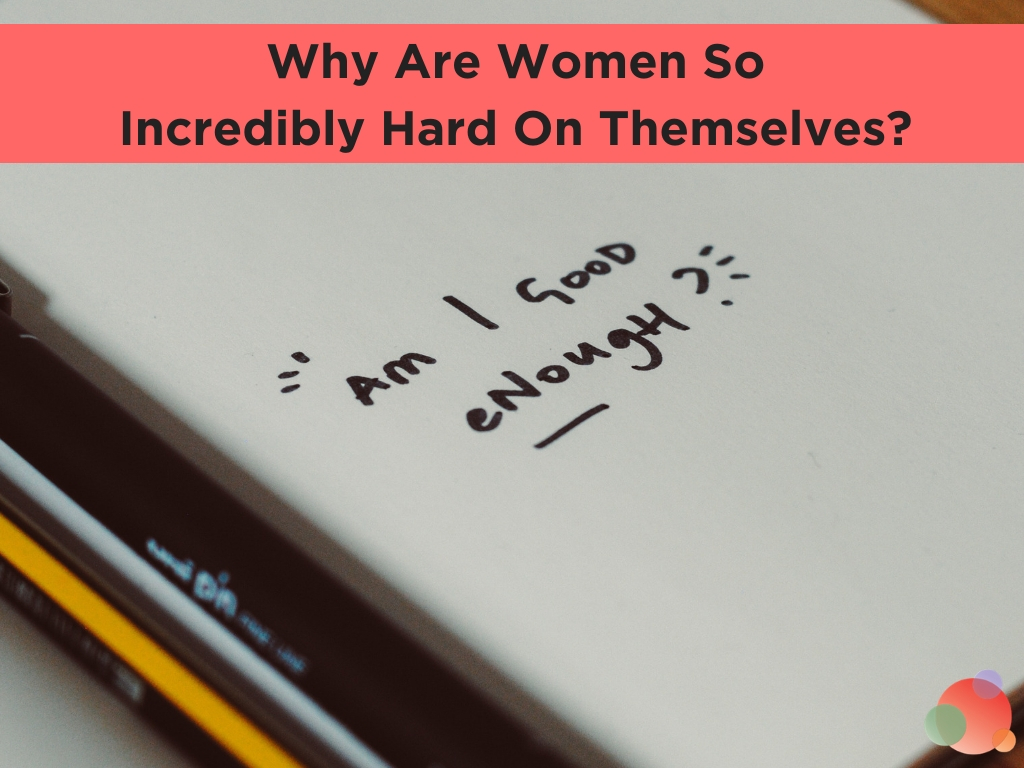 A few weeks ago, I read an article, by happenstance, on Man Repeller.

The Pressure to Look Good is about why women self-deprecate, apologize, and put this crazy pressure on ourselves to look good.

The gist of it is that we won’t allow photos to be taken if we don’t look our best (some even use crazy filters to make ourselves look “better”). We won’t leave the house without make up on. And we certainly apologize to whomever is around if we aren’t at our best.

If you’ve seen the Marvelous Mrs. Maisel, you’ll remember a scene where she gets out of bed, does her hair and makeup, and then climbs back into bed before her husband wakes up.

All so he won’t see her with bedhead or without makeup. Ever.

It’s crazy, but it’s not outside the realm of what many of us have done in our lifetimes.

(And if you haven’t watched the series, it’s easily one of 10 best shows ever produced. Watch it.)

Why, oh, whyyyyyy do we do this to ourselves?

Why Are Women So Hard On Themselves?

But it’s just not women in TV shows or on blogs named Man Repeller.

This past Sunday, we were at the apple orchard with our besties and the cameras came out to memorialize our trip.

I whined that I hadn’t washed my hair or put on any makeup so I didn’t want to be in any photos.

My girlfriend turned the selfie camera on herself to check her hair.

Our husbands didn’t do that. Our children certainly didn’t do it.

So why did we?

Likewise, my small one is totally into taking photos and video with my phone right now. And I let her because I often find some gems later.

(I recently found a video of a “poem” she recited about how much she loved her mama. If you don’t think I am keeping that forever and ever, you are sorely mistaken.)

But, as I was scrolling through her creations a few nights ago, I found a video she had taken of me singing, “You Are My Sunshine.”

The camera angle was awful (because, well, she’s five, not an award-winning videographer). She got right up into my nostrils at one point. And I had pin curls in my hair.

I started to delete it and then I remembered The Pressure to Look Good and I left it.

I convinced myself that if something happens to me, she won’t care what I look like (or what I sound like). She’ll only care that she has video of her mama singing to her.

(It’s still there, but don’t think I’m not tempted to just go ahead and delete it. We can always shoot a new one of the same song when I look halfway decent.)

As it turns out, this is a very real thing.

A Cambridge University study found that women cannot accept compliments with a simple “thank you,” especially if they come from other women.

According to one study, “only 22 percent of compliments given from one woman to another were accepted, but from men, it was 40 percent of the time.”

Social psychologist Laura Brannon says this is because:

Because we live in a society where women who may respond with a simple “thank you” can be seen as conceited or egocentric.

And we live in a society where women are Photoshopped without a single flaw, so we think we have live up to that version of a celebrity.

(Don’t get me started about when I very recently learned that my favorite celebrity hairdo is actually a wig. Devastating!)

No wonder we can’t take a simple compliment and feel like we have to primp before allowing someone to take our photo.

There Is Only One Way to Change It

The only way to change that is to start with ourselves–and then to support one another.

Even though I’m obsessing about the video my small one took, I am going to force myself to be OK with the fact that she’ll have it for eternity.

Hopefully I’m around forever and ever and she won’t need it to remember me. But I also know I’m not invincible.

I hate the idea more that she wouldn’t have video of me singing to her than of how bad I look in it.

I challenge you to do the same.

But you do have to get comfortable with being OK that you don’t look fantastic for every photo, video, or event.

In some cases, the memory comes in everything that surrounds what’s happening—and that includes your no makeup, hair on top of your head, belly flab showing self.

Get there yourself. And then be strongly supportive of other women in your life.

If you compliment them and they self-deprecate or ignore what you’ve said, call them out.

It’s the only way we can get past this.

Let’s change it. Once and for all.