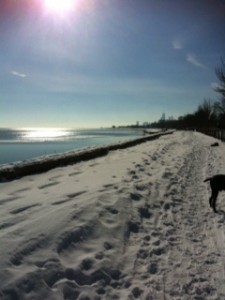 I got cross-country skis for my birthday. For those who know me well, you know I am an avid cyclist. During season, I ride about 300 miles a week. I love my bike. But during the winters, which are really long here in Chicago, I’m stuck on a trainer. In the basement. Not moving for an hour or more. Watching sitcom after sitcom on DVR, hoping to keep my mind from the mundane exercise that keeps me in shape for next season. Last year, my friend Jeff Lipschultz jokingly referred to my bike as Kennedy (after the Kennedy freeway in Chicago) – you get on, but you don’t move.

So being able to be outside, in Chicago, in the wintertime is huge for me. I don’t care if it’s 20 below and gray. If I’m outside, bundled up, and exercising, I’m pretty happy. And cross-country skiing is excellent training for the bike (and downhill skiing when I get the chance to go home).

Last Saturday, Jack Bauer and I took the skis to the lakefront to try them out. Well, I skied…he marked everything as his. While there were a lot of people out jogging on the path (it hit 30 degrees last weekend and you’d have thought it was beach weather), no one was right on the beach where there was plenty of snow to ski.

So I let Jack off his leash while I tried to figure out the magnificence that everyone talks about while gliding (it’s not easy). About an hour into our adventure, we came across a couple who clearly didn’t like dogs. So I skied up, said a bright good morning to them, and moved Jack out of their way.

And that’s when it happened. The woman, with a sour look on her face, turned to me and said, “Your dog should be on a leash.” To which I apologized and said yes, he should, but they were the only people I’d seen in an hour and he was having a ball so I didn’t think anything was wrong with it. But that I’d be happy to put him on a leash until they were out of sight

She went off on me. Screaming and yelling about how there are rules for a reason and blah, blah, blah. So I brightly said, “I’m sorry! Have a great morning!”, put Jack on his leash, and went the opposite direction. She was still yelling at me as I skied away.

My magnificent day turned quickly from bright, shiny happiness to a “what the heck is wrong with this world” attitude.

One woman. One encounter. Just like that. Changed my mood.

And you know what’s interesting about that? Emotions, like a cold or the flu, are contagious. She took her bad mood out on me and, try as I did, she changed my mood, too.

There is a new study from the University of Michigan called the “Collective Construction of Work Group Moods,” that studies exactly that – how moods and emotions affect culture and morale.

This is particularly important for leaders to understand – the way you feel sets the mood for the entire office. If you’re a leader who screams, yells, and nit picks every, little thing, do you think your direct reports won’t behave the same way with their direct reports?

The good news is that positive emotions are just as contagious as bad ones.

As my mom sings, “If you change to meet a frown, do not let it stay. Quickly turn it upside down and smile that frown away.”