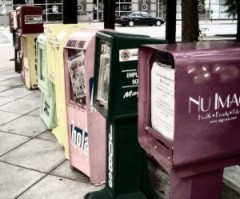 I developed a theory I still think might be partially right – Jeff Bezos purchased the Washington Post to study newspaper distribution methods.

I may be wrong and I think he’ll undoubtedly bring some unique perspectives to the iconic paper, but I can’t help but wonder if that’s the case.

After all, when I was still running the DNJ Media Group, just a week ago, we had delivery people who drove down every single street in the county every, single day. That’s a pretty powerful physical distribution network, rivaled only by the U.S. Postal Service, FedEx, and UPS, and I can promise you we did it cheaper than those guys.

So, I’m having a conversation with a social media guy about three weeks ago. He laughed at “newspaper penetration” and talked about all the people he can reach with social media.

I explained to him the DNJ media group is no different than many other media outlets. We had print product – the daily, four weeklies, and/or the monthly magazine – that reached every single house in the county at least once a week.

Then I asked the question, “Can you, with absolute certainty, reach every single house in Rutherford County using only social media?”

Distribution Methods and the Point of My Snark

He can talk about social media all day long, just as I can talk about the combination of my paid and free distribution print products reaching every house. But what does it matter?

In my mind, Spin Sucks serves two primary purposes. First, it is a professional development tool for those working in the various marketing disciplines. The target audience is quite obvious.

Second, it is a lead generation tool. That means it must reach a certain audience. If all we reach are professionals who have no involvement with marketing and will never be involved in marketing, we have wasted our time and money.

Fortunately, we are distributing to the audiences we need and Spin Sucks is effective in both purposes.

Distribution methods should be as unique as the content with which they are paired.

At the “newspaper,” our distribution included the print paper and the website. It also included Android, iPhone, and iPad apps. We also had the mobile-optimized sites and surprisingly popular digital replicas of the print paper.

Much of our content was distributed the old-fashioned way, with a person chucking the paper out a car window. We also had push notifications, email blasts, email newsletters, text alerts, and social media to drive readers to our content.

Each audience, though, was different. The mobile app readers generally were not the print readers, who in turn, generally weren’t reading email newsletters.

Last basketball season, two local women’s high school teams played each other. At the time, they were ranked number one and two in the state. A couple weeks after the game, I’m speaking to a class of high school students and asked how they heard the final score.

Of those who were not at the game, about 75 percent said, “Twitter.”

I asked for specifics and about 65 percent of those said they heard about the game from Tom Kreager’s Twitter feed. Kreager is the prep sports writer for the Daily News Journal and has close to 5,000 followers on Twitter. A majority of those are high school students.

The newspaper used Twitter as a primary distribution tool to reach an audience people say newspapers can’t reach – high school students. A 16-year-old will not buy the print version, nor will he open an email newsletter. But he will follow you on Twitter if you distribute content relevant to him.

A few days ago, Gini Dietrich wrote a blog post about organic link building. Her number one tip, based on the teaching of Sean McGinnis, is to write epic content. She’s right. You have to create outstanding content for content marketing to work.

Then you have to get it into the right hands.

And where are those hands? Imagine your target audience is made up of blog readers, but you are publishing a print magazine. Or your audience is on Twitter and you are focusing on Facebook. In both those cases your content is wasted.

Conducting an analysis is the complex process of simply asking people how they like to receive their content.

Here are three things you can do to figure it out.

Take a little time and really dig into how you are distributing your content. A slight tweak might make all the difference in the world.