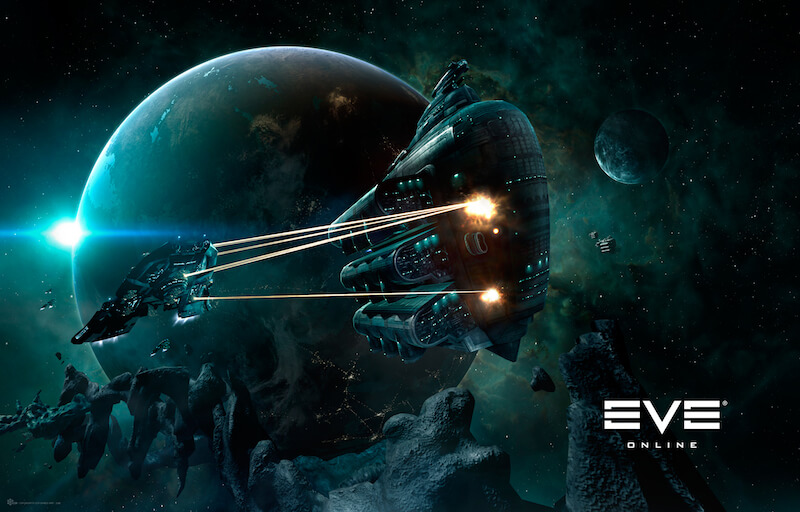 I have two main hobbies: One is stamp collecting, which I’ve mentioned before and the other is gaming.

At the moment, my poison of choice is Everquest 2, in large part because I can play it with my dad.

However, off and on for years, and at times fairly seriously, I’ve played Eve Online, a science fiction-themed game set in space.

The game is player-focused and players have a lot of freedom. Essentially, if you can do it in the real world, you can do it in the game. There are huge battles between players, an actual economy, piracy, betrayal, espionage, exploration, industry — and just about everything in between.

The battles between players often attract mainstream media attention, most recently for an imaginary space battle that cost tens of thousands of dollars in real money. They are very aggressive about publishing announcements and reviews in gaming magazines and websites. They also have an extensive pay-per-click and retargeting digital advertising effort they’ve used for years.

However, in terms of marketing, what CCP Games – the developer of Eve Online and a couple others – does best is content marketing.

The Players Make the News

The game takes great strides to make its customers – the people who play Eve Online – the center of their “story.”

One of the newest things they do is crowdsourced stories, and other heroics, performed by actual players in the game.

Gamers can share their stories, discuss them, and then vote them up or down. The “dangling carrot” for the players, in this case, is the stories getting more votes could be used in future marketing and promotion campaigns.

As Andy Warhol famously predicted, in the future, everyone will be world-famous for 15 minutes.

Then there is the World News. In this section, news from within the game, much of it driven by player events and activities, is covering what players are doing in the game. It is very much like reading an actual news site.

In both cases, Eve Online accepted content from players. This is obvious from the crowdsourcing effort but even with the World News content, they use players who serve as “journalists.” This isn’t just content marketing. It is user-generated content marketing — and that costs the game’s corporate owners very little to produce.

Seriously, this works because of ego. Many people want their 15 minutes of fame. We like to read about ourselves and our neighbors.

When I was publisher of small-town weekly papers, we always had a local happenings column. You know what I’m talking about.

“Mrs. Jones fell while trimming her roses and is in the hospital. Send flowers (of course no roses) to room 232.” Or, “The church fellowship lunch featured Mrs. Betty’s macaroni and cheese. She won’t share what kind of cheese she uses, but…”

These columns, while we poke fun of them, are incredibly popular. Why? Because they are about us, our family, and our community.

This is why it is so bloody effective for CCP and Eve Online.

If I participate in a huge battle, there is a chance it could be written about. Thousands of players may read of my exploits or the exploits of the friends with whom I play.

It actually happened to me. About three years ago, I was “working” in game to supply one side in a major war. In a massive running battle lasting most of a day, I managed to lead a supply fleet through an enemy blockade specifically designed to choke off the supply of war materials. Nerdy? Of course. But let me tell you, while my wife might – rightfully – roll her eyes when I talk about the game, I got quite a kick reading about my successful blockade run in the “news.”

Eve Online has entered an arrangement with Dark Horse Comics to publish an Eve Online comic book. Tie-ins with comics are fairly common, and a lot of toys, games, movies, and even bands (KISS, anyone?) have had their own comic book titles.

What makes this different is, you guessed it, the story lines are based on players’ in-game experiences. Hence the name of the comic book, Eve True Stories.

The first edition is based on an infamous in-game event — a theft — that ultimately led to the destruction of one of the largest player-formed alliances – in Eve or any online game.

Every business has something Eve Online has – customers. By not only addressing them directly, but making them part of the story, Eve is scoring a huge content hit.

What do we learn from this?

If you have customers you have a story because every customer, whether you are B2B or B2C, has a story to tell. Help them tell their story. And don’t forget, you and your customer have the story of your relationship. Don’t be afraid to tell that story either.

Don’t make it a testimonial or a case study. Those are excellent tools and certainly have their place in your marketing scheme. However, this is a narrative. Tell a story and engage the emotions.

Old Spice did this when Isaiah Mustafa started responding directly to tweets and other comments in a series of YouTube videos. Other companies have similarly included the stories of their customers to great effect.

Eve Online has developed a content marketing system that would seem to be quite powerful at retention. The addition of a commercially available comic book has the potential to reach a new audience, attracting new gamers opening their wallets for $14.99 per month, every month.

And at 600,000 and growing, that amount of potential coin ain’t too shabby.