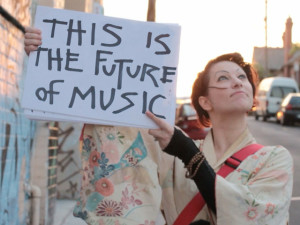 One Friday night in 2011, I was on Twitter when I suddenly started seeing a flurry of tweets from friends in Boston about a concert they had been to that night.

It was a ‘secret show’ given by Amanda Palmer, and as I watched dozens upon dozens of tweets flying by, I decided to see what the big deal was.

What Amanda had done was organize a ‘secret show’ by giving away tickets to the show.

In order to be eligible to win tickets, you had to go to Amanda’s Get Glue profile and leave a comment sharing your favorite experience at an Amanda Palmer concert.

The show was a wild success, and Amanda holds these ‘secret shows’ often, using social media to connect with her fans and create an amazing experience for them.

Now, the Skeptical Marketer will hear this, and immediately spot the big problem: She didn’t sell any tickets! Hello! And not only did she not sell any tickets, she gave all the tickets away to her biggest fans, the people who would likely be the ones to buy tickets from her!  All this rocker chick did is leverage social media to lose ticket sales! Right?

In May of 2012, Amanda launched a project on Kickstarter to fund a tour to promote her new album and art book. She set the funding level for the project at $100,000, which was the highest level Kickstarter would allow. She leveraged the same social media channels that she had used to promote and give away thousands of free tickets to her secret shows. But this time, she asked her fans to help support her and help her raise her lefty goal of $100,000.

Did it work? In 31 days, Amanda’s project was backed by almost 25,000 of her fans, who pledged a grand total of $1,192,793. This exceeded her funding goal by more than one million dollars, and at the time made Amanda’s project the 2nd most funded project in the history of Kickstarter (today it remains the most funded music project ever on the site). There was some controversy around the project, and you can read about that here. 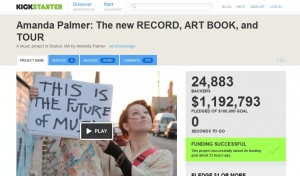 If you research the top goals for marketers, you’ll see ‘acquire new customers’ mentioned early and often. In researching my new book, Think Like a Rock Star, I was trying to discover what the ‘secret sauce’ was for a rock star’s marketing success. Why is it that Lady Gaga, Taylor Swift, Amanda Palmer, and dozens of other rock stars can cultivate armies of passionate fans, while most brands cannot? What are rock stars doing that most brands are not?

First, I realized most brands focus on acquiring new customers. They position their marketing so it appeals to new customers, with the idea being that new customers equal new sales.

There’s a couple of big problems with this approach:

1. New customers have little to no loyalty toward that brand. So ,while you may get that initial purchase from them, there’s no guarantee you will get a second one.

2. Since new customers are frequently leaving, there’s a high churn rate. You might need to bring in 5,000 new customers to eventually retain 500 of them as current customers. That means the cost of marketing to this group goes through the roof.

What happens when Amanda Palmer does secret shows for her biggest fans? She gives her biggest fans another reason to love her. Those fans then go out and tell all their friends about how amazing Amanda is, and they acquire new customers on her behalf.

Mack Collier is a social media strategist, trainer, and speaker located in Alabama. He specializes in helping companies better connect with customers, as well as cultivate fans via social media and other marketing initiatives. Mack is a highly sought-after speaker and has been quoted in some of the world’s most prestigious news sources, including The Wall Street Journal, Time, ESPN, The Washington Post, and others. He founded and moderates #Blogchat, the largest Twitter chat on the web. His first business book, Think Like A Rock Star: How to Create Social Media and Marketing Strategies that Turn Customers into Fans will be published in April, 2013 by McGraw-Hill.

View all posts by Mack Collier