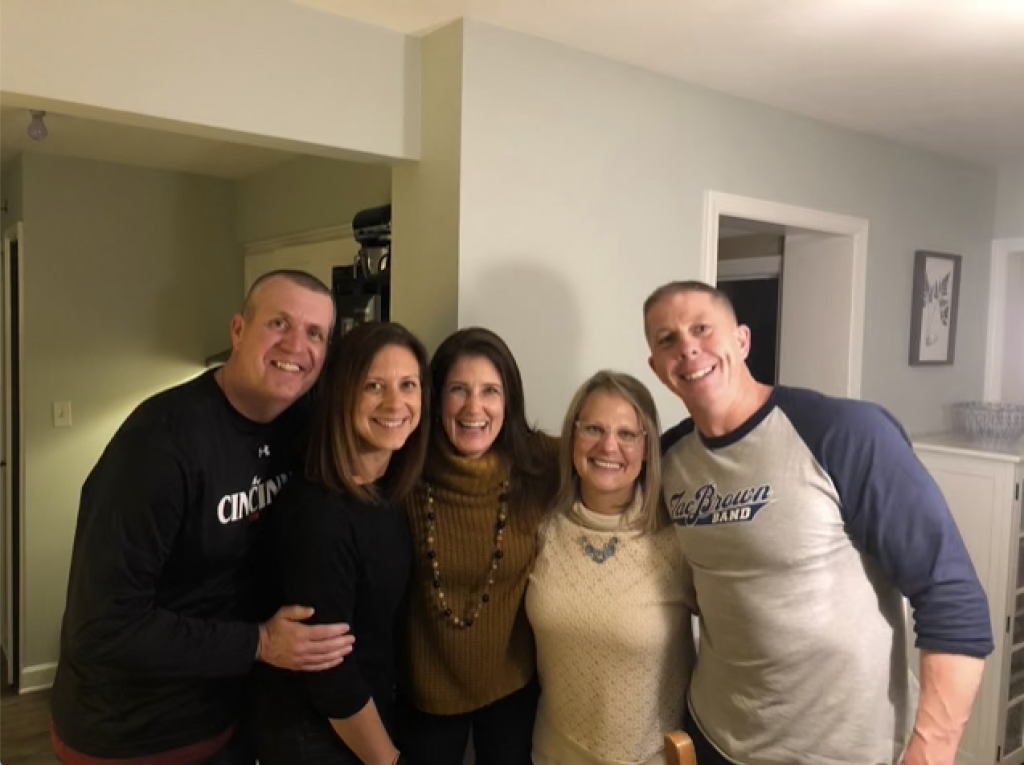 Today we talk to Cathy McPhillips about how she’s coping during a pandemic. Check back every Friday to learn about a new  communicator and how they’re coping during this crazy time.

That was the last time I spent time with friends.

That’s us in the picture here. We were supposed to be seeing Zac Brown Band that night, and the concert was canceled, so we ended up hanging out at our house.

Who knew what the following weeks would bring?

Like everyone, I’ve had my ups and downs through this. Mostly ups, thankfully, but I’ve had my moments.

Here’s how I’ve tried to avoid the Hot Mess status.

Between work, working out, and family, I often (especially in the winter) fall into a rut of just wanting to be home.

But…tell me I CAN’T go out, and that’s a different story!

I needed to make sure I didn’t let all of this slip me farther into that rut.

So I made a conscious effort to shut down at night and do something fun and different.

That has included family game and puzzle nights after dinner, barreling through six seasons of Madam Secretary on Netflix (obsessed), and spending time with my mom who has been knee-deep in genealogy the past few years.

She’s been sharing pictures and stories with me via email and then a few times in person across the room from each other.

I hear her stories or something she’s learned, she hands me the photos/documents, and I upload them into ancestry.com.

It’s really been cool to hear the stories of her grandparents and aunts and uncles, and go down a rabbit hole trying to piece together some information.

I’ve worked from home for two decades, and I have it down to a science.

Me and our dog, Lucy, have our system.

Truthfully, it’s been really nice having everyone around.

With two adult children, I know that nightly dinners and time together isn’t something that we *should* be having right now, and something I know won’t last forever.

But with three of us working from home and one who just finished finals, we all needed quiet space in our home.

The problem with our lovely 80-year old brick home is that the WiFi leaves something to be desired.

Four people x a few devices per person was a challenge.

Our son went to Best Buy, spent $200 on some WiFi gadget (extender? I don’t know what it’s called) that has solved our problem so each of us can be in four corners of our house and get our work done, have privacy on Zoom calls, etc.

Speaking of, I think I still need to pay him back.

Probably the biggest blessing of all of this at-home stuff has been my time with my daughter.

We go walking for an hour or so a day.

I’ve dragged her down to Lake Erie with me in the freezing cold, and we’ve caught up on lots of things.

Having that uninterrupted time with her has been priceless.

Talking about life, college— including more than I really need to know, how she’s feeling, and then being able to see the amazing adult she has become…I’ll be sad when this stops.

We’ve been really trying to watch spending, except for the grocery store who I feel I’m single handedly keeping in business, but my biggest purchase was a spin bike.

A local studio was selling their fleet, so I jumped on that opportunity.

I’ve been taking online classes, which are not at all the same as the energy of the pack in a studio, but hey, I’ll take it.

I also have a dozen spin playlists I’ve created that I’ve been doing on my own that have given me some semblance of my former schedule.

But I didn’t realize my family really wanted to eat every day!

One of my brothers is a chef, and at the beginning of all of this, he delivered guacamole and homemade chips to all of our houses (way to set the bar high, Matthew!).

That started a domino effect of my siblings delivering meals to one another on doorsteps.

On Cinco de Mayo, we delivered chicken burrito bowls and frozen margaritas to everyone.

Thankfully, we’re all within a six-mile radius and I sent the kids out to deliver when I was done cooking.

And I may have finished my first margarita before they got home!

I really have done a not-so-great job of accomplishing those things I’ve always wanted to do.

And I’m really OK with it.

And watched Netflix A LOT.

I’ve tried to keep up on reading, but always fall asleep with my Kindle in my hands.

Our January and February were crazy fun, but way too busy.

When this all hit, for a selfish second, I was grateful for a chance to absolutely nothing.

But now, I miss people. I miss hugs. But I know that will come soon!