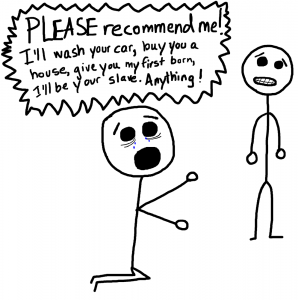 As most of you know, there is a thing called #FollowFriday that happens on Twitter.

But, like anything else in life, people got lazy and found shortcuts and suddenly your Twitter stream every Friday was full of tweets that just had Twitter handles included without any context or reason to follow those people.

There is no value in that and, let’s be real, it’s pretty annoying.

So, on May 29, 2009, we started doing #FF a little bit differently. At first, it was a list of people in a blog post with a couple of sentences about each person. Eventually it evolved into one person per week and has become one of our most popular blog posts.

Here is the complete compilation of the 2012 recommendations.

So there you have it! The 44 recommendations that came with this year.
Now I leave it to you. Who would you like to see highlighted in 2013?

There will not be a Gin and Topics or The Three Things this week.

Have a happy weekend and a very happy New Year! See you in 2013!