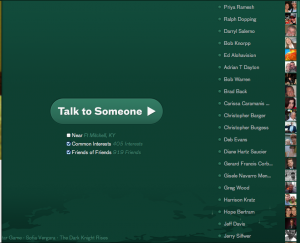 Well, Sean Parker and Shawn Fanning, both of Napster fame (and later Sean Parker, played by Justin Timberlake in The Social Network) are at it again.

This time with a video chat service that is said to rival Skype and Google Hangouts.

I’m not sure it’s better than either of those services, but it’s Justin Timberlake’s alter ego so we have to talk about it, right?!

The current video platforms are designed to talk to only people you know. But Parker and Fanning met in a chat room 15 years ago, not knowing one another at all, and that turned into creating more than one business together. They missed the serendipitous nature of these kinds of meetings so decided to recreate them using today’s technology.

And, as luck would have it, it’s open only to those who have a Facebook account (coincidence? I think not).

Which begs the question, if Facebook is a social network for the people you already know, how can they recreate the chance meeting?

It’s not yet open to everyone and you have to have a minimum number of friends to participate (they don’t say what that number is), but it’s pretty easy to get it installed and started…if you meet their criteria.

Go to the Airtime site, click “launch application,” allow it to connect to Facebook, and then it brings up a list of friends who also are online and have the app installed.

On the right-hand side of your screen, you’ll see a list of friends and, if there is a video icon next to their name (when you scroll over it), you can video chat with them right then and there.

But let’s say you want that chance meeting Parker and Manning describe.

After you sign in, you can meet new people by clicking “Talk to Someone.” The software pairs you with other users based on the information in your profile and the criteria you select, such as your hometown, friends of friends, or the interests you’ve added to your profile.

Once you’re paired with someone, you can see the interests and friends you have in common by clicking the Airtime logo in the center of the screen. You remain anonymous to the other user until either of you sends an “Add” request and the other person accepts it.

It’s kind of a slick little app. All I know is now I’m going to have to stop working in my cycling clothes, if I want to use this tool to connect with friends (and non-friends) far and wide.

A version of this first appeared at Shift Digital Media.