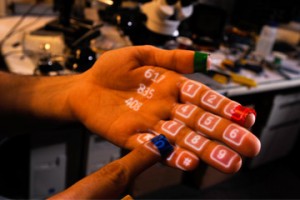 I spoke last night to the PRSA Central Ohio chapter.

I really love Columbus. It’s a great little town and, every time I visit, people are sooooo nice to me. I was there for all of three hours, but I still felt very welcome.

One of the things we talked about was augmented reality. I realized as we chatted, I spend a lot of time showing examples of this cool new trends when I speak, but I’ve never shared it with you.

Be prepared to be amazed!

What is Augmented Reality?

Augmented reality, according to Wikipedia, is:

a live, direct or indirect, view of a physical, real-world environment whose elements are augmented by computer-generated sensory input such as sound, video, graphics or GPS data.

In other words, a computer creates new senses for you as you read, watch, or experience publications, videos, or events. Think of it as being placed in a 3D world while you read a magazine or shop in a retail store.

It’s very, very cool. It’s one of those technologies coming that gets my nerdy side excited.

One of the very first examples I saw of augmented reality was Lego. I don’t have kids so I have no reason to have Legos in my house (though I buy them for my nieces and nephews), but this really makes me want to buy some.

If you scan the box of Legos before you buy them, it will show you what the construction of it looks like.

I can’t do it justice in words. Watch.

Then, a couple of months ago, I saw a new campaign by IKEA. I’m not an IKEA customer (mostly because I HATE to shop so the idea of spending anytime in a place like IKEA on a weekend in the suburbs of Chicago gives me the heebie jeebies), but this makes me want to reconsider my stance.

Their 2013 catalog will be something you’ve never experienced.

Alright, let’s be real. Unless you are a marketing or PR pro who also has amazing skills with API development, particularly around camera data, this is not a DIY project.

Which means, unless you work at a large agency with big budgets and clients like Lego or IKEA who are willing to spend some money to experiment, this is not something you’ll get to implement in the very near future.

That said, there are companies popping up now that will help you add digital content to your print media in an easy and effective way.

Layar is one of those companies and they have a free level of pricing that allows you to test some things on your own. Then, depending on how you publish and where you distribute, it charges you per page.

So if you have a catalog like Ikea, it gets pretty spendy. But if you’re testing something cool to take to a trade show and want 100 pieces, you’ll spend about $1,000.

Admittedly, I have not tried this for us yet so I don’t know how well (or if) Layar works. But it looks super, duper easy so I promise you I’ll try it and report back.

In the meantime, let’s hear from you. What experience do you have with augmented reality?