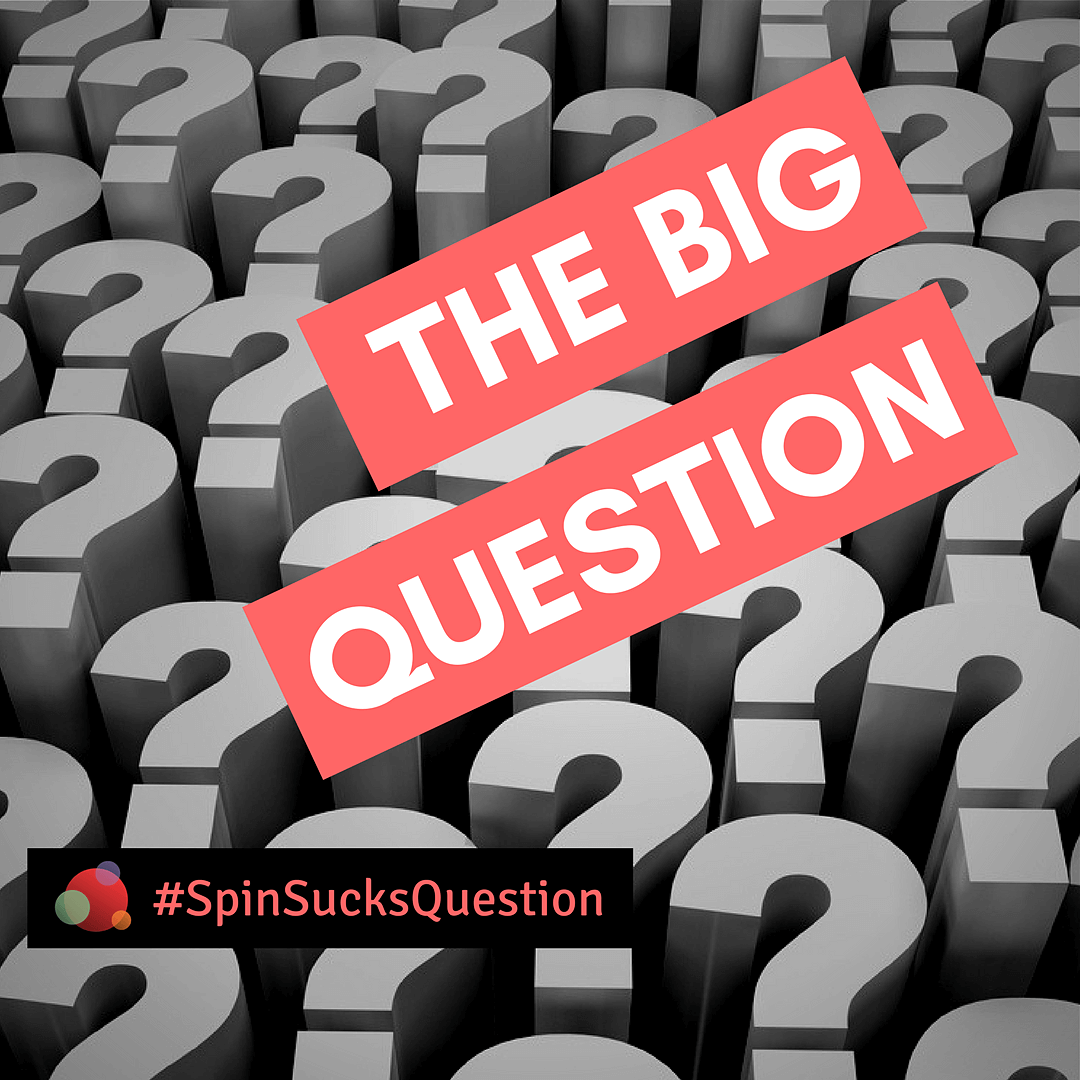 When we had an office, we used to play corporate BINGO.

There was a gigantic white board in the energy center (where the interns sat) and we’d keep track on there.

We had a client who said “frankly” every, other word. That’s not an exaggeration, either. In one 30-minute conversation, she used it 78 times.

There were lots of other phrases, such as “with all due respect,” “guru,” “ninja,” and more.

Corporate jargon is a funny thing. We all hate it. We all know it’s not useful. And yet…

We all tend to latch onto corporate jargon and buzzwords, and then comes the backlash.

Phrases that were once the darlings of blog posts everywhere, suddenly become fodder for “X is just marketing” social retorts.

And so goes the life span of thought leadership…

…despite it being a component of almost every communications plan.

Bring it up in conversation with other communicators and you’re guaranteed to see some eye rolls.

Many, many eye rolls.

Is it because it’s no longer an effective PR program element?

Is it knee-jerk backlash without justification?

Or does the term need to be wrestled back from all the self-proclaimed thought leader ninja innovation experts?

To find out, we asked you last week’s Big Question:

Is it time to retire the phrase thought leadership? If so, what replaces it?

Whenever considering terms and language it is crucial to define and outline the parameters. For businesses, thought leaders are at the cutting edge of producing a product or service which advances both the thresholds of what is possible and aid others in realizing the possibility.

If the term ‘thought leadership’ needs to be retired it is only because people or groups who claim to be thought leaders have not delivered. The result of continuous lack of follow through creates the negative connotations.

There are a lot of people who have figured out how to make a living out of proclaiming themselves thought leaders, and selling their advice to others.

But the thing is, it doesn’t work that way.

You have to earn thought leader status through demonstrating your subject matter expertise and being a part of the conversation in your industry.

If the phrase thought leadership is irreparably tarnished, what do we use to describe using content to raise the persona brand of our clients?

And how do we keep that new phrase from going out of favor just as quickly?

Personally, yes, I believe it is time to retire the phrase. However, it won’t go away because like so many other phrases, it is embedded into corporate speak.

With that said, I’d say replace it with something such as, “demonstrated authority” or “industry expert.”

We don’t always work with top management. There are a lot more opportunities to position people as an industry expert than a thought leader. You can go as narrow or as broad as needed. — Susan Cellura

The backlash against thought leadership is less about the phrase itself and more about what it has turned into: Thinly veiled marketing copy.

If we change the phrase, this problem will persist until we have a wake-up moment and realize we need to fix it. Over and over again, editors carefully build contributor guidelines, and yet when they receive contributed content from a PR pro or directly from a business author, there is usually some kind of blatant sales angle or marketing ploy that turns them off and makes them reject the article.

It’s no wonder they’re annoyed. It’s our job as PR professionals to weed this out of content, whether we’re the ones doing the writing, or our clients hand us something to review and submit.

We’re Sick of the Term, but it Does the Job

Despite arguments made in favor of abandoning the phrase, many PR pros instead advocate for our doing a better job of educating our clients on what it is—and what it isn’t.

I don’t think so. To me, it’s more than a buzzword. It is something you or your client should actually exhibit both as a part of giving back to your profession and community and as something that will benefit you. It isn’t a made up buzzword (even though it has become one)—it says succinctly what it is. Just my two cents. — Mike McClure

The term thought leadership should not be retired, because when used correctly, it’s an effective initiative at the core of what PR strives to achieve. For the effective PR professional, thought leadership is about developing a strategy and program that builds the brand’s profile, and strengthens authority of its executives to become trusted sources who can influence and impact decisions.

Unfortunately, over the years thought leadership has been bandied about in conversations in a way that doesn’t adhere to this definition. PR pros who promise an exec will be a thought leader overnight, or without any vision, position, or insight, are doing the organization and themselves a disservice. But it’s up to the PR pro to make that distinction, educate the brands they work with, and craft a successful, measurable program over time.

What do you think about thought leadership? Jargon or buzzword…or just fine, as it?

And, while you’re thinking about that, also put next week’s Big Question in your pipe and smoke it.

On the heels of our conversation with Christopher Penn on how artificial intelligence will affect the future of the PR profession, it’s only fitting I get your take on the matter.

That’s why this week’s Big Question is:

How are you preparing for the changes to the PR profession due to the rise of artificial intelligence and machine learning?