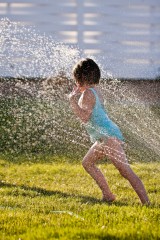 Anyone who knows me well, knows I’m a tad OCD.

What does my OCD have to do with brick walls and bad social media?

Read on my friends, read on.

My OCD doesn’t fall under a neat little spectrum.

I’m not “can’t leave the house without washing my hands” OCD. And I’m not “have to check the stove 10 times” OCD. Oh no.

My OCD is far more random than that:

When I was a kid, sprinklers were my nemesis.

Rewind to a lovely summer day, 40 odd years ago (holy CRAP I’m old!). I was gamely trying to play along with my pals, running back and forth through the sprinkler.

However, I was the only child closing their eyes and turning their head away right at that crucial jump-through moment.

All was going well, until that one jump. I closed my eyes a smidge too soon. And I didn’t notice the neighborhood boy barreling at the sprinkler from the other side, heading right for me.

He most likely noticed me, and went in for the kill anyhow.

I flew about five feet, my eyes definitely open by this point, until I was stopped—face first—by the rather unforgiving brick walled side of the house.

Just like the brick wall I’m hitting at the moment with Jawbone.

If you don’t know them, Jawbone is a cool San Francisco company that develops and sells insanely good portable audio devices, speakers and such, as well as the Jawbone UP and UP24 wearable fitness tracking bands.

Our fearless leader, being a bit of a fitness FREAK, purchased UP bands for all of us, and instituted a contest to get us all off our rumps and moving during the day.

I may be a tad obsessed with the contest, and am currently *this* close to beating Laura Petrolino.

These UP bands, while really good at tracking steps and sleep, are notorious for breakdowns.

But, up until now, Jawbone has owned these glitches, with excellent customer service and a super fast exchange policy—within days.

I was always extremely impressed by their attitude: Own the problem, and make sure your customers are happy and not inconvenienced (much).

I’m on my third UP band, in just a little more than a year, and it is now dead.

When I approached customer service via email, the standard course, I received this response: Sorry, your year warranty expired in May. Tough luck, suckah! (paraphrased).

Wait a second. Shouldn’t your “year warranty” roll over with each new replacement band, considering the issues were product defects?

When I expressed my dissatisfaction at this response, the rep emailed me back to say she was closing my ticket. I was stunned. Then I got cranky.

Trying to calm down, I said to myself, “Self, you probably got a summer student, someone not fully schooled in the AMAZINGNESS that is the Jawbone corporate policies!! Someone not aware of their MAGNIFICENT track record of customer service.”

So, I took to social media.

About a week ago, I added a very nice and polite inquiry to their Facebook wall. Crickets.

Then, when I went back to check my post, I saw they had responded to other people above my comment. So, I added another comment, reminding them about my original complaint.

So then I took to Twitter. Asked for feedback on the warranty issue. Again, not ranting. And again. Crickets.

Jawbone is no fly-by-night organization. They’ve been around since 1999. Have nearly 500 employees. And nearly $400 million in funding.

Are they getting too big for their britches? They shouldn’t be. They have A LOT of competition.

Are they hiring incorrectly when it comes to customer service and social media? Maybe. Sure feels like they have interns running those ships.

Whatever the issue, learn from their mistakes. Remember that the customer is what makes YOUR world go ‘round. And most importantly, never forget there are always alternatives.

Said fearless leader was an early investor in Moov. Perhaps I’ll convince her to buy me one of those. ‘Cause this brick wall is getting really uncomfortable.