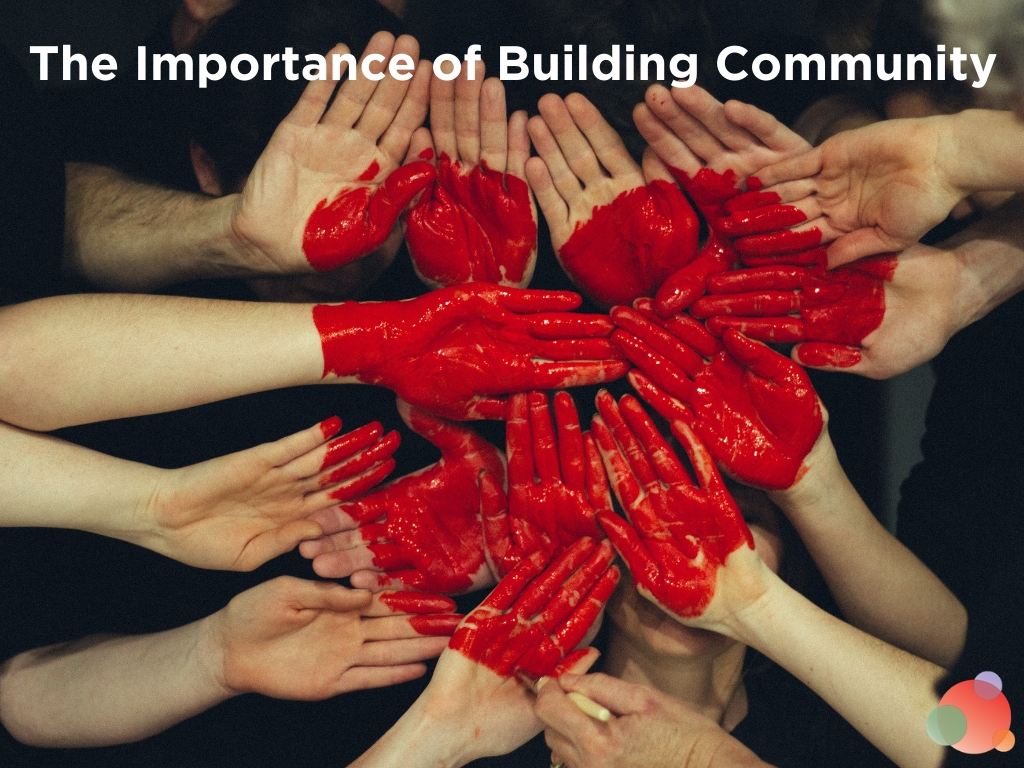 It’s November and two days before Thanksgiving, which means it’s a great time to reflect upon all the things in life that are amazing and for which one is grateful.

Clients, prospects, friends, acquaintances, and even foes often say to me:

I don’t know why you do it. Building community is so time consuming…and hard!

And it’s worth every bit of work and more.

Nothing Is Ever Perfect

In May of this year, we launched an enormous agency owner program.

We took it first to current clients and we spent five months with them piloting the program while we built the content, based on their feedback.

We also spent those five months testing our funnel and collecting data so we can make smart decisions based on numbers and not on emotion.

But we were patient (not a strong suit of mine so it was even more challenging) and, based on what we were seeing, decided it was time to take it up a notch.

In October, we launched new Facebook ads with me on video.

I was…not pleased. I didn’t want to do video ads and I obsessed about making them perfect.

I did costume changes. I moved to different parts of the house. I had several versions of the same message…and I didn’t like any of them.

But I had to go with the mantra I say to our agency owner clients all the time:

It’s better to be finished than to be perfect.

So, after several takes of every video, it was time to release them to the world…and let data be our guide.

And People Are Ruthless

And then the comments started.

Oh, my. The comments. 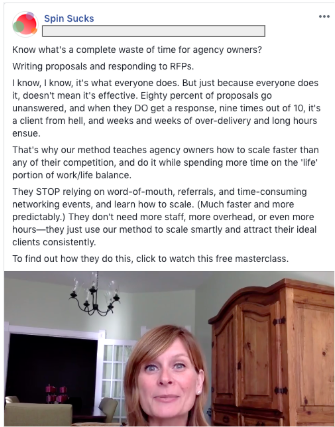 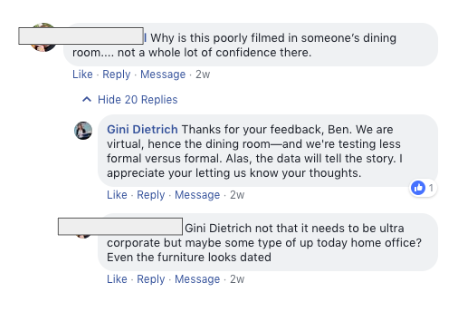 I had to write and delete at least 16 comments back to these two humans.

The light fixture is not contractor grade. My dad gave it to me as a wedding gift.

Sure, it was 15 years ago and it’s dated. But it’s sentimental.

And the tube TV armoire?

I live in a house that was built in 1891 so to say the storage space is plentiful is being generous.

So yeah. I have a tube TV armoire that serves as my china cabinet.

But, of course, I can’t explain all of these things to people on Facebook.

But a Community Will Protect You

And, in the time I was trying to figure out what was appropriate to actually publish, the community came out in full force. 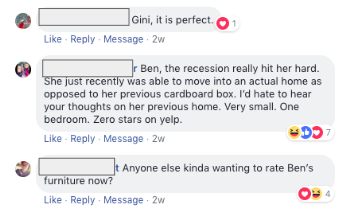 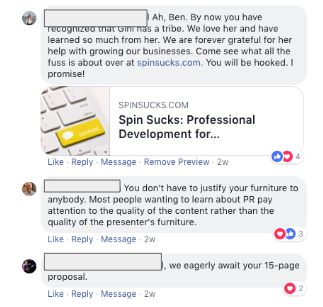 And it kept going and going.

I didn’t have to say another word to the critics. The work was done for me.

And it was glorious.

The Fake World of Internet Marketing

It’s an interesting time we live in.

There are “famous” internet marketers out there who claim to make so much money, they can teach you to do the same.

To prove they are successful, they shoot videos in “their homes” and from “their cars”.

There is so much money oozing out of those videos, you can’t help but think:

Wow. I need to know how this was done so I can do it, too.

We all get caught in that trap.

Except it’s not real.

These “famous” internet marketers rent gigantic homes on the ocean for the weekend. They rent a crazy expensive car.

And they shoot all of their videos at once.

They make it look like they’re oozing cash but, in reality, it’s all fake.

And it’s all real.

Nothing fake about that contractor grade light fixture or tube TV armoire.

Which is exactly the entire point of Spin Sucks.

Our vision is to change the perception that business leaders have of the PR industry.

To do that, we have to build community and collaboration and consensus.

We have to be above reproach.

Everything we do has to be ethical and honest and forthright.

If the trend is to shoot videos in expensive (but fake) homes, we’ll buck that trend.

If it’s to spin the truth or craft fake news, we’ll buck that one, too.

And the beautiful thing about the Spin Sucks community is you are right there with us.

In the case of the furniture critics, it took about .02 seconds for you to come out in droves.

And the second best part about it is we obtained two new agency owner clients from it.

One participated in the conversation and one watched how it was handled and wanted to know more.

Which Is Why I Am Thankful For You

So, on this Thanksgiving Eve Eve, I am thankful for every one of you.

I am thankful that you choose to spend your work days with us.

That you trust us to help you evolve your careers.

That you believe so strongly in modern communications, you are also willing to buck the trends.

But mostly I am thankful I have a crazy group of people I can legitimately call friends.

For those of you who have put yourselves out there to stand up for us: thank you.

To those of you who spend time with us in Slack: thank you.

To those of you who contribute content to make us all smarter: thank you.

And to all of you who came out in droves to tell Ben he was off his rocker, thank you.

Now I’m off to shop for a new dining room light fixture. ?

Photo by Tim Marshall on Unsplash