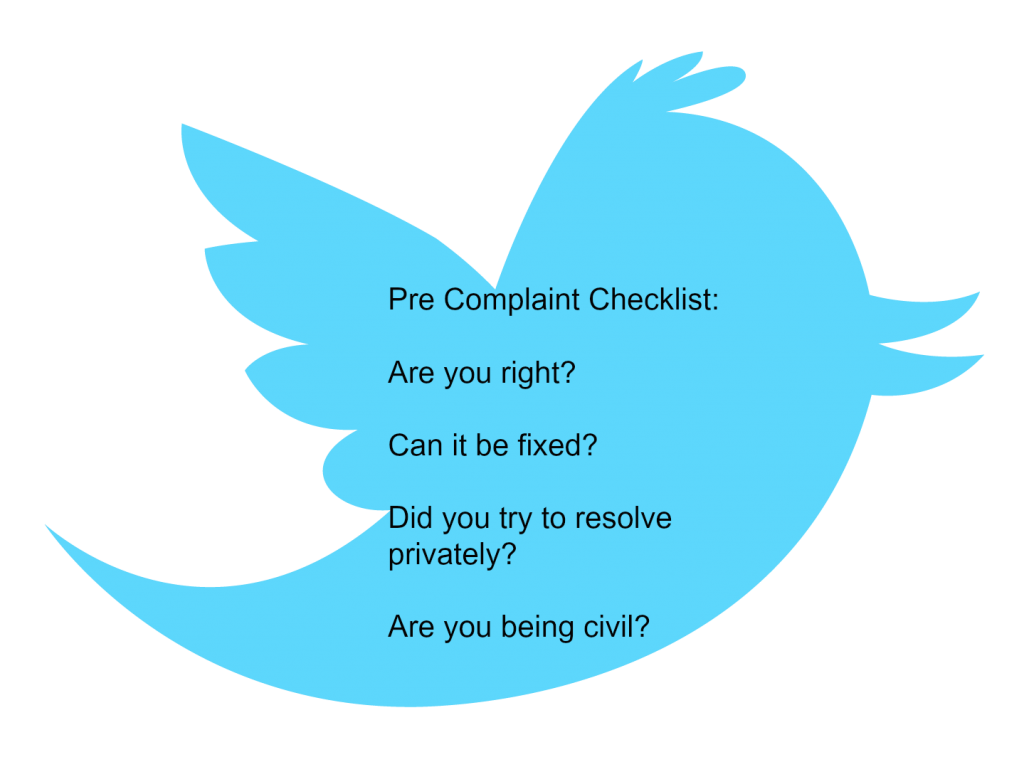 There are four questions I ask myself before I complain on Twitter.

I can’t say I haven’t violated my own policy sometimes, but if I really want to get my problem solved rather than complain on Twitter, these four questions tend to come in handy:

When I left my job in May, my family kept our health insurance carrier but switched to a different account with my husband as the primary insured.

Each time we have gone to pick up prescriptions since the switch, we have been told that we needed to present a separate “prescription” card that differs from our insurance cards.

I have gotten a little more frustrated each time as I have argued that I have not yet received this card.

I called our insurer, and they said, “We don’t issue those cards; you’ll have to call someone else.”

This was not the answer I wanted, of course.

After a few more interactions like that, I began crafting my social media assault. I wasn’t going to take it anymore!

Fortunately, when I was cleaning out an old stack of mail, I found the cards. Turns out they had been mailed on May 31.

I would have been wasting social media time, as well as dragging our insurer and the pharmacy benefits manager through the mud for my mistake. It’s a good idea to double and triple check your premise before you complain on Twitter.

Can it Be Fixed?

For the process improvement geeks out there, this could more aptly be called, “Are you addressing the root cause?”

For me, nothing demonstrated the need for this than my “fingerprint copier” incident.

My organization got new printers that would only dispense the finished product when the user’s fingerprint was recognized (for reasons related to HIPAA – the Health Insurance Portability and Accountability Act).

I grew more and more livid at the five times it took to prove to the machine that I was, indeed, me.

When I tweeted the video I had created to demonstrate this, I immediately got the attention of the business’s vice president of communications.

That part was good, but at the root of the situation was the fact that neither the local business who installed the printers nor our internal IT staff had trained us on how to properly activate the biometric identifier.

I was also highly frustrated with a co-worker’s histrionics over the printer issue. It was causing a disruption to my train of thought.

In the end, my employer was none too happy with my video, which landed us on the radar screen of a major corporation’s communications department. I was roundly disciplined for emailing them to explain my concern from my business email.

The fixable part of this situation was the training component. The unfixable part was our corporation’s lack of a social media policy and the internal dynamics.

Did You Attempt to Resolve it Privately?

It is so easy to tweet. It is much more difficult to look up an email address, write a letter, or make a phone call.

However, it is often worth the time to take the private approach first.

Resolving privately sometimes yields a more direct and immediate resolution and preserves the relationship between the consumer and the business.

Because a business with whom a customer has an issue often isn’t following that customer on Twitter, I recommend sending an initial public tweet that says something like, “I have a concern; can you tell me an email address to send it to?” (Or you can ask that they direct message you.)

When private resolution fails, then I don’t hesitate to go public, as occurred with my “sham” episode.

Are You Being Civil?

I don’t want to spread vitriol unnecessarily. The world has enough meanness as it is.

If you are tweeting from your personal account or a corporate account that identifies you in the profile, what you tweet is as much as reflection of you as the impression you give when you meet someone face-to-face.

Would you scream at your cashier and call him or her incompetent if they made a basic mistake while checking out?

If you wouldn’t be so mean in person, why be unnecessarily ugly on Twitter?

What types of experiences have you had with complaints on Twitter?