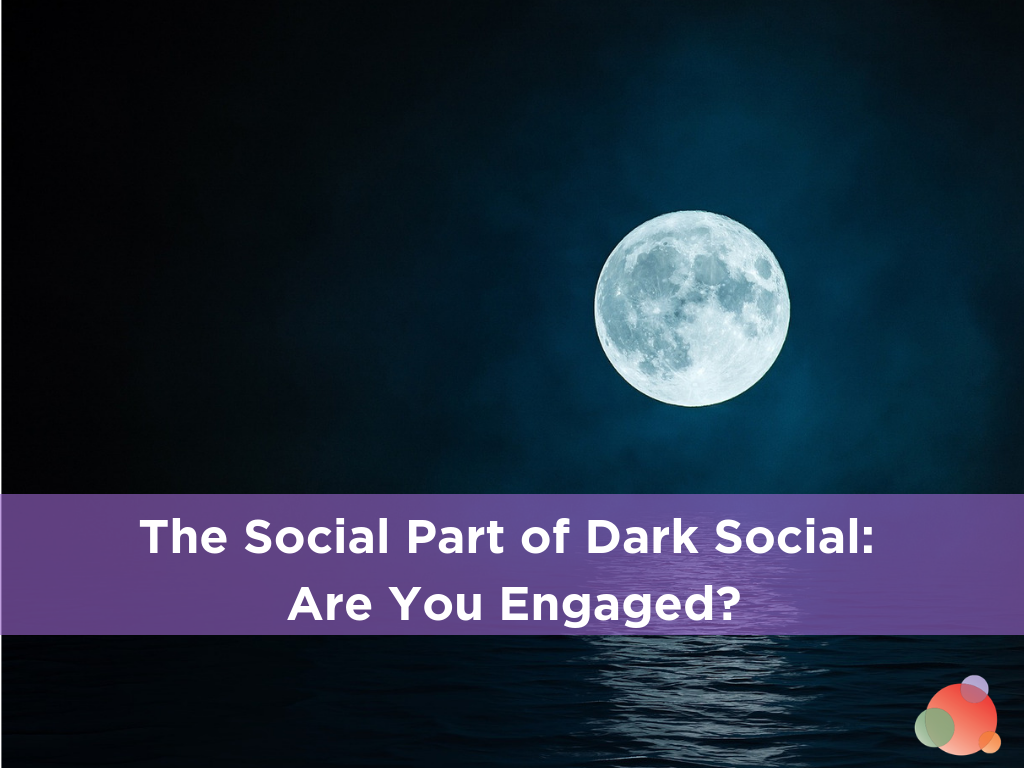 I only recently heard the term “dark social.”

When someone mentioned it on Slack, my immediate thought was, “Well, that sounds a bit nefarious…”

As it turns out, I must have been spending entirely too much time on Reddit’s No Sleep subreddit (with its stories about the scariest places on the internet), because there’s nothing to fear with dark social.

So what is it?

Dark social is any sort of social sharing that’s difficult to track, including instant messaging, emails, and platforms such as Slack and WhatsApp.

We use Slack here at Spin Sucks, and we’re big proponents of the platform.

We even have a free community for marketers.

For us, it’s a great place for advice, discussions, and the sharing of all things related to the communications industry (and some things not related, too!).

It works for us and it’s a private place where marketers can get advice, brainstorm, and even vent…without the watchful eyes of bosses or clients.

But is dark social right for your organization?

Let’s break it down.

While dark social is currently rising in popularity, it has been around for a while.

According to a recent study by Radiumone, a whopping 84% of all shares happen through dark social.

But when you stop to think about it, that number isn’t so surprising.

How often do you share a funny link with friends via text message or Facebook Messenger, instead of your social media feed?

Even as someone who loves to be involved in a good conversation on social media, I’m way more likely to privately share something with a group of friends through a private channel.

Of course, the marketing industry would prefer we share everything in the open.

That way, the stats roll in, and we get a clear understanding of where the action is happening.

That’s what we’re all aiming for, right?

Well, yes and no.

The Social Part of Dark Social

Yes, conversions are ultimately what we want, but we can’t get there without some brand to customer engagement.

Last year, University of Oregon communications students took on Spin Sucks as a client, and they found we were posting too much of our own stuff.

Sure, we had guest authors, but it wasn’t enough.

It was still our own content, and it made it look like our social media accounts were almost being run by a bunch of bots.

Statistically, all of those posts on Twitter pushing our content to the public brings us lots of traffic, but it’s all for naught if you feel like you showed up to the party and you’re the only one there.

Spin Sucks had essentially become everything we preach against—all in our mission to scale the business.

And that’s why engagement is so important.

It’s no secret that social media engagement for some organizations is a tough nut to crack.

(It’s not easy for us and we’re a bunch of communicators!)

What we found is that a large part of the engagement we see is through Slack.

Building a Community Behind Closed Doors

It might seem counterintuitive to increase social engagement through a private channel.

You’d think more people would be inclined to participate if the conversation was available to everyone.

Have you ever heard of visiobibliophobia?

It’s the term to describe someone with a fear of posting on social media, and was coined originally as someone who was specifically afraid of Facebook.

As social media grew in popularity, however, the term expanded to cover all platforms.

My brain gets cramped by myriad of thoughts, including: “What if people think this sounds stupid?” “What if my information is incorrect?” “What if someone gets annoyed with a notification about receiving a comment?”

In Slack, things are better.

I still have my fear of posting stupid-sounding comments, but it’s shrunk considerably.

I’m with people in my industry who typically enjoy discussions about the same things I enjoy.

And, in return, I can now participate in conversations more while feeling less intimidated about posting comments or questions.

Building a community on dark social might not be for everyone.

In many B2B organizations, conversations tend to slide to the technical side of things.

This leaves less room for discussion if the answer is definitive, but maybe for industries such as consumer products, or communications, it’s time to pull back a little from the social scene.

We don’t mean you should quit engaging with your audience.

But maybe it’s time to offer a smaller venue.

If shouting into the void isn’t for you, perhaps having a more intimate discussion is.

If you find yourself less intimidated when engaging with a smaller audience, you might not be the only one.

With options such as Slack, dark social is becoming more appealing and personally, my introverted self is all for it.

Does your company employ the use of dark social? Are you for it or against it?

The comments section is open for business!