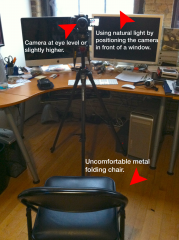 Anyone who’s ever tried to take a picture of me, or shoot video of me, knows one thing for certain.

Yes, that’s on top of my already written about OCD.

Are you sitting down?

Double chins run in my family, though my sister, Beven, has one of those glass-cuttting jawlines that make me cry in my pillow at night.

She’s also the oldest, so you know, at least I have that.

But somewhere down the genetic line, we were blessed with those chins—you know the ones.

They just kind of slope down towards the neckline. Not much definition.

And man-o-man, it doesn’t matter what weight I’m carrying, if I’m caught on film and not positioned just right, well, double chin is hopeful.

Triple or quadruple is more likely.

If I can control my environment, I can usually get a shot of myself I actually like.

Hence why you won’t see many, if any, chin shots on my Facebook page.

I know, I know, first world problems. But it’s a thing, and it drives me insane.

Doing Video with a Face for Radio

But video is another story. You’re moving! Your MOUTH! If a double (or triple) chin is coming, you really can’t do much about it.

Laura Petrolino wrote a great post at the beginning of our visual content month, giving you tips and tricks for getting started with video.

And, we’re talking the DIY stuff.

The type of videos we do a few times a month—at our desks, in our living rooms, even in front of brick walls!

But, Laura’s post was more about adding video to your content strategy, how to create video that your clients and customers will get value from, and she touched on ways to become more comfortable speaking in front of the camera.

I’m a little more shallow than Laura (…more vain than Laura? Both…?) so I wanted to write about how to make sure YOU LOOK FANTASTIC when you press that record button!

You can thank me later.

I went to one of the best.

Tony Gnau is a three-time Emmy winning journalist and producer, and heads up T60 Productions.

He’s worked with us here at Spin Sucks, and wrote last week about some of the benefits of taking the plunge, and hiring a professional video production team, if your budget allows.

But if money’s tight, or you just enjoy the rawness of DIY video, there are a few things you can and should be doing to ensure you get the best possible outcome (in other words, you look mah-va-lous), and don’t drive your viewers bonkers.

I spent a long time working in TV, so bad video (and yes, that means YOU too), makes me crazy.

I asked Tony what his biggest bug-a-boos were when it came to DIY video.

A few weeks ago, we asked a handful of clients to create a testimonial video for us to include on the Arment Dietrich website.

We had just a couple of requests (you can see them in the blog post Amy Bailey wrote about the project) and left it up to them to do the rest.

What Amy did next was hilarious…and extremely smart.

She recorded a video for us and then she wrote a blog post and did outtakes to educate her audience on how to DIY videos.

So, there you have it.

While content is king, if the video you are creating is crap —and look, sad as it sounds it’s true, if YOU look like crap—no one will be watching for long.