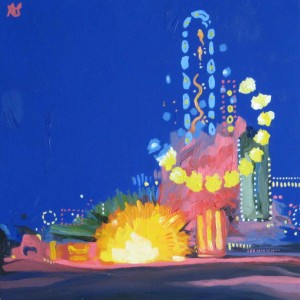 It was the Roaring Twenties. He was wealthy and threw great parties. He may have been a celebrated character, but Jay Gatsby was also mysterious and unknown.

F. Scott Fitzgerald’s fictional nouveau-rich millionaire died at the hands of a jealous husband. Though the Great Gatsby was famous, very few people attended his funeral. The perception of influence did not follow Gatsby to the grave.

This is a good lesson to keep in mind in the midst of the Empire Avenue craze.

However, beyond personal objections about the quantification of social worth, there seems to be little value for Empire Avenue. Primarily, the universal plusses discussed are the entertainment itself and Klout-like influence metrics. It should be noted that the stock prices/influence metrics can be increased by internal trading activity

In Welcome to the Fifth Estate, there is a concluding discussion about influence and the importance of not getting caught on finite influence systems. The reality of an evolving social web is that influence is very subjective and relative to each community as well as the changing technology landscape. Further, influence can be a result of past acts rather than current ability to sway the crowd.

Widespread influence metrics have their own detriments. While someone may be able to command large audiences online, their influence isn’t strong enough to get people to act in niche communities. Or they are inaccessible.

Point being, a high stock score looks great. It sure takes a lot of time to amass, and yes, it is attention worthy. But what does it actually get you other than reward you with a big number for spending hours online?

Empire Avenue might be just spin; really sexy, fun spin. In the end, Spin Sucks, and you end up with no one at your funeral.

What do you think of Empire Avenue? Spin or reality?

Graphic: original cover art from the Great Gatsby 85 years ago.