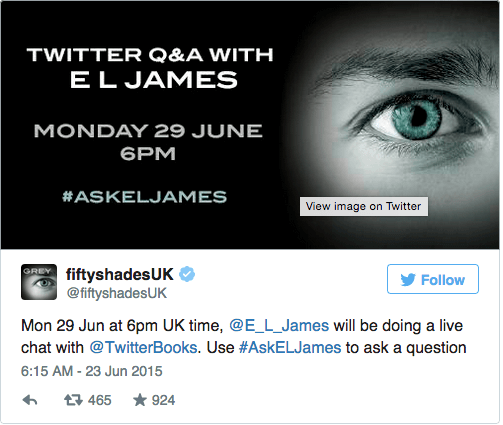 A few years ago, my good friend Abbie Fink suggested I read Fifty Shades of Grey.

I remember this because we were in New Orleans for Counselors Academy and everyone was reading it at the same time.

When I finished, I announced I needed to bleach my eyeballs; not because of the “erotica,” but because the writing was so bad.

We had a good laugh about the book and commiserated on how bad (SO BAD) the writing was. As communicators, we pride ourselves as good—if not great—writers and the writing was particularly offensive.

To this day, when anyone asks if I’ve read it, I always say the writing was so bad, it made me want to bleach my eyeballs.

And I’m not in the minority among this.

All you have to do is Google, “Fifty Shades of Grey awful writing” and you’ll find pages and pages of articles written about just how bad it really is.

That’s why, when Laura Petrolino sent me a Buzzfeed article and I later saw the same thing on Monina Wagner’s wall, I just shook my head.

What Could Possibly Go Wrong?

It seems E.L. James, the author of this horribly written book, participated in a Twitter chat…and the Internet took her to task.

This, of course, isn’t James’s fault. It’s that of her book publicist.

When you set out to do something like this for a client or team member, you must think through everything that could possibly go wrong.

In this case, her publicist should have come back and said, “Here are all of the things that could go wrong”:

If it were me, I’d look at this list and decide the reward did not outweigh the risk…and not do it.

But either her publicist didn’t do this work or the work was done and James decided to go ahead with it anyway.

Either way, what ensued was not good.

And then her publicist got the wrath of the interwebz:

But this is a great example of exactly what can go wrong.

In fact, Google “Twitter chat gone wrong” and you can find lots of examples of what you can expect if you don’t plan your Twitter chat.

It’s our job to stop, think, and plan. Every time.

If your boss, client, executive, or colleague wants to do a Twitter chat, always think, “STP.”

(I totally just came up with that, but it works! STP could also mean “stop,” which reminds you to stop, think, and plan.)

Here is the very least that you should do for every Twitter chat…and it won’t take you very long, but it will save you a lot of pain in the end.

If you make the recommendation and the Twitter chat still goes forward, you did your job and can’t be blamed (plus you’ll have the added benefit of being able to say, “I told you so,” which is sometimes just as rewarding).