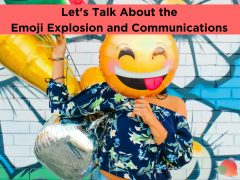 If I happen to be holding my husband’s phone and one of my children texts him, I like to respond back. With an emoji. That instantly mystifies the child who sent the text because, “Dad doesn’t talk in emojis.” Now they’re pretty much on to it and will call me out.

Why Are We Talking About Emoji?

And yes, “emoji” is the correct way to represent plural emoticons, at least in my world. There are debates, but I use AP Style for work, so I am going with their rationale. It all began with a conversation in the always-fun, always-informative Spin Sucks community. Jill Manty asked why there is an urn emoji. Jill has a point. Her curiosity was piqued when she was searching for a “party” one, didn’t find one, and began going through the alphabet. The conversation wandered from there, and somehow it ended at me agreeing to write an article about emoji. I think the idea was to actually do an entire article consisting of emoji, but that’s easier said than done.

In the spirit of an “all-emoji” article, though, let’s start with just one sentence. I’ll share my intent at the end of the article (no cheating please!!). Consider it a Spin Sucks trial balloon. So that you’re not totally hanging in the wind and starting from whole cloth, I will tell you this is intended to replicate a title of a fairly recent Spin Sucks article. Not one authored by me, but one that has run here recently. Ready? Thoughts? (Try to figure it out without looking it up!)

Emoji have been around for decades, although early incarnations were primitive. According to Wired, the predecessors were emoticons. Letters and symbols make up emoticons, with the first one possibly tracing back to 1982. Emoji are more recent (1999), and they are pictographs, not character/letter combinations. Now fast forward to them becoming Unicode, in 2010, then their addition to the iOS keyboard in 2011. The race was on!

Emoji Are Cute But How Do They Affect Me as a Communicator?

Now that they are ubiquitous, they are leaping onto our clothing and into our stomachs (well, not tangibly into our stomachs—keep reading!). Catchy emoji-theme items are proliferating, including clothing and home decor (even a Mr. Poo Night Light!). But can they be used for more than decorating something else? Can they do something? Domino’s would say “yes”! Domino’s Pizza customers with the AnyWare app can order a pizza just by sending the pizza emoji.

Whether a customer wants to order using a popular voice-driven smart speaker or with an emoji on Twitter, Domino’s has them covered, says this EConsultancy article.

Recently, World Emoji Day was a quick lesson in encouraging successes and embarrassing flops that can occur when brands use emojis. The response to the U.S. Army’s attempt at emoji-based humor was not uniformly saluted—people had a hard time seeing a cute connection in a profession so risky and embroiled in geopolitical angst. Here’s the thread.

Can Pictures Really Replace Words? Should They?

Once I began digging around the Emojipedia, I came to realize that, although we may think they eliminate misunderstandings because they are so consistent (they are designed to be that way, by the way), each has 13 manifestations depending on the platform. Let’s talk about this for example: Although I imagine most people may correctly identify it as the slider it’s intended to be (in Apple iOs 11.3), if I were in a hurry, I might see a cross. (And my frustration with *why* the emoji keyboard is so oddly organized is a topic for a different rant.) This version, designed for LG, looks more like an audio slider (unless it is elevator shafts …. sigh).

Emoji Are a Symbol

Maybe emoji are a symbol of what brings communicators to the business in the first place. At first blush, they seem innocuous, simple, and cute (okay, maybe the urn doesn’t deserve “cute,”). They are a quick way to express a deeper meaning through a shared graphic. Did the first person who put a “ : ” and a “ – ” and a “ ) ” together to create a primitive smiley know that someday a hungry pizza fan would be able to manifest a pie to their doorstep just by pressing the pizza emoji? They have taken on lives of their own and infiltrated the way we communicate. I was one of those people saying, “I’ll never sprinkle my communications with emoji.” One look at my text history and that’s quickly disproved. Emoji are fun. They can be profitable. They can boost the way we communicate on behalf of our clients. Ultimately, ironically, they connect us to one another as we sort out what they mean, what we plan to do with them, and how to best get our messages across. Maybe they are coming full circle to make us talk to each other. With words. And here’s the answer to the “quiz” above:

How to Avoid Pitfalls With Your Corporate Video