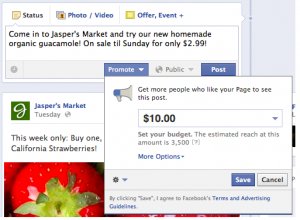 The awesome thing about the web and social media, in particular, is it levels the playing field. No longer do you need millions of dollars to spend on PR firms and ad agencies in order to build your brand and reputation among the masses.

Today all you need is a good writer, a self-hosted website and/or blog, and organically grown social networks. With those three things, you suddenly are competing with the big boys for reputation and credibility. You’re seen as a thought leader in your industry. You’re creating kinship among your prospects. And you’re selling in a way that has never before been possible.

All of the tools are free so it’s a really low barrier to entry. And it works.

The big social networks continue to run their platforms free to us because they consider us the product, not the user.

Take Google for example. They have been successful because they keep introducing free features – analytics, blogging, RSS feeds, Google+, Docs, Hangouts, and more. Their thinking is of course, if they offer really good free features, we’ll continue using them, which boosts their pageviews and drives advertising.

Advertisers are their users. We are the product. And it works really well for them. They do, after all, have a market cap of $25o billion.

So why is it Facebook is trying to squeeze more money out of its users? Why not look at us as Google does…as the product?

Sure, I understand they’re now a public company and they have to find new ways to make money, but there are several business models before it lighting the path.

If your business has a Facebook page, you’ve likely seen a decrease in “likes” and interaction. We have one client who went from 10,300 interactions per day to less than 3,000. Overnight.

Why? They aren’t using Promoted Posts to increase their visibility. In other words, they’re not paying Facebook to show their updates to the more than 63,000 people who have voluntarily liked their page and opted in to have them in their stream.

Only 30 percent of those people are seeing their updates. The other 70 percent? They have to set aside a budget to pay to promote their posts to those people.

If they were to pay for it, they’d need a budget of $228,800 to reach the people they were reaching for free before the social network’s IPO earlier this spring.

I run a small business in Chicago. We update our Facebook page 20-25 times per week. We have just a tad more than 3,500 fans so we wouldn’t be charged as much per post as our client. But we’d still have to spend in the $25,000-$30,000 range to reach the people who have voluntarily liked our page.

So I would have to decide if it’s more important to reach all 3,500 of our fans or pay for half a person to help service clients. I think you know which way I’d lean.

Suddenly the playing field is no longer level. We’re both the product and the user at Facebook.

A version of this first appeared in my Crain’s Chicago Business weekly column.