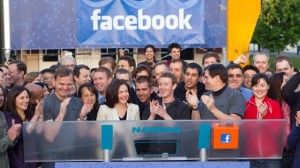 It’s been an interesting few days in the social media/tech world.

Facebook went public, began trading at $42.05 (and then dropped to it’s original $38) per share, and it’s founder, Mark Zuckerberg got married in a surprise wedding that was supposed to be a celebration of his now wife’s graduation from medical school.

Named the 29th richest man in America, Zuckerberg now shares that fortune with the woman who has been by his side since college.

But both his personal and work lives have simultaneously gotten harder (remember your first year of marriage??). While maintaining majority ownership in the social network, the 28-year-old (and I thought I was hot stuff at 28!) must now answer to Wall Street, which means the $1 billion they made in profit last year must increase.

Just a few days after GM announced they’ve dropped their Facebook advertising (and Super Bowl advertising too, it seems), the social network must pull itself together and begin offering even more to users and advertisers (which means more changes…don’t freak out) or it will end up going the way of AOL, Netscape, and MySpace.

Where else do you think Facebook must grow in order to make money, keep users happy, and satisfy Wall Street?