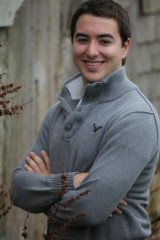 I have some news! Daniel Hebert is not joining our team!

Thank you for indulging the news about Laura Petrolino and Clay Morgan the past couple of weeks. We’re now back to our regularly scheduled programming.

And with that, please allow me to introduce one Mr. Daniel Hebert.

Daniel has a lot going on. He’s an influencer relationship manager at InNetwork, the co-founder of SteamFeed, and lover of food. In fact, he loves food so much, he has threatened to end his marketing career and compete against me in a cook-off (which likely means I have to end my Global Domination career).

One of my Canadian friends, he lives in Halifax, Nova Scotia ( he’ll LOVE a video I put in this week’s Gin & Topics), where he went to school.

He’s one of us and really understands the marketing world, particularly as it relates to working with influencers. He’s not an over-the-top, pushy marketer. Rather, he understands how to develop relationships – particularly online – and is very careful about cultivating them.

To prove my point, I have a case study for you.

Daniel finished school in May 2012 (which makes me feel really old!) and, as he began his job search before graduation, he decided he wanted to work for Radian6.

And why not? They’re a really exciting business and they’re a Canadian company.

To get their attention and stand out from his competition, he created a social media campaign with one goal in mind: Get an interview with the company.

He began to engage with Radian6 on Twitter and then wrote a post titled, “Why I Should Work for Radian6.”

Both very, very smart tactics and things I recommend young professionals do (and they rarely do).

But then…he took his passion for influencer relations and asked his influential followers to share the post with their communities and to tag Radian6, where appropriate.

A mere 24 hours later, Radian6 contacted him to schedule a phone interview. While he didn’t end up getting the job (the position started in March and he graduated in May), there were several bloggers who wrote about it, including Ragan and Media Bistro.

Where to Find Daniel

I tell you that story because he gets it (and because we need to keep him in marketing so I don’t have to quit my day job to compete against him in cooking challenges) and it’s a really important case study in how the world of the job search has changed.

We won’t interview anyone who sends us their resume blindly. There are a gazillion ways to get our attention and those who do it have first dibs on open positions.

This is a young man to watch. He’s an up-and-comer and you can say you knew him when.

You can find him on Twitter, LinkedIn, Google+, the InNetwork blog, on SteamFeed, and in the comments here.

P.S. Daniel, I know I owe you a blog post. I was hoping this would gain me some leeway for being a week late!