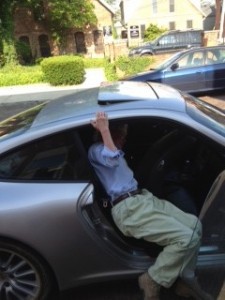 I have this amazing friend. Her name is Deb Dobson.

If you’re a frequent reader of Spin Sucks, you’ve seen her name mentioned, particularly associated with a funny video or two in Gin and Topics.

Deb is, without a doubt, one of the most generous people I know…and I only just met her IRL this year, though I’ve considered her a friend for a good three years.

When we first connected on Twitter, she was living in Kansas City, which (as some of you may know) was my stomping ground right out of college and until I moved to Chicago in 2001.

So we immediately had something in common.

When I was in Columbus in May (which is where she moved to after Kansas City), not only was I taken care of by Michael Bowers, Nate Riggs, and the super active social media community there, Deb made sure I had directions from to/from the airport and that I had something to do for dinner when I landed.

At dinner, she introduced me to one Dave Hunegnaw who quickly took me under his wing and began introducing me to, well, just about the entire city.

Between he and Deb, I felt like I was hanging out with the Mayor. And that’s not an exaggeration. They know everyone in that darn city.

Deb is an avid tennis player, a CRM maven (I go to her with all of my CRM questions), a photographer, and a lover of cars. In fact, she’ll be really mad at me for using the photo I did above, but it is her, getting out of the backseat of her dream car (she let me sit in front), and nearly getting stuck. I mean, I had time to take a picture. How hard can it be to get out of a Porsche? Really.

Through it all, Deb has become a confidant, someone I laugh (and cry) with, and a dear, dear friend.

She’s one who, when you check her out, will engage, will ask you questions about yourself, and will give of herself more generously than anyone else you know. You can find her on Twitter, Google+, LinkedIn, and on Just My Take (even though she hasn’t posted there in nearly a year, which I will shame her into doing with this blog post).