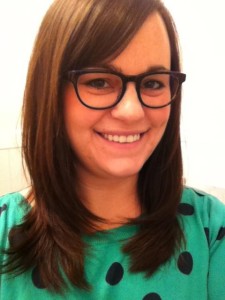 In order to introduce you to today’s #FollowFriday, I have to come clean about something.

When I saw them on SNL about a year ago, I fell in love.

I realize this is going to reduce my cool factor in many of your eyes. I blame it on the fact that I didn’t grow up like most of you with posters of boys on my walls and listening to music. I always had my nose stuck in books so I missed that whole music thing until after college (waaaaay after college).

I’m coming clean now because I want to tell you how really great she is, but I know she’ll bring it up in the comments (cheater!) and I’d rather manage the fallout.

Now that we have that out of the way, allow me to introduce you to the Warby Parker-obsessed, community manager Erica Moss.

A Michigan native, she recently (okay, it was more than a year ago, but it feels recent) moved to New York to run the community for the online master’s nursing program at Georgetown University.

With a journalism degree from Western Michigan University, she began her career writing, writing, and doing more writing. She soon found herself managing social and online communities and has carved a cool little niche for herself.

Where Can I Find Her Online?

Even though you should never tell her your most embarrassing secrets, she’s the real deal when it comes to genuinely good peeps.

Check her out, follow her, subscribe to her blog, and say hello to her in the comments here.

P.S. I am taking my writing vacation (aka I have A LOT of writing to get done) Monday through the 21st so Jay Dolan will do the #FF honors on April 12th (my 10 year anniversary!) and Chuck Kent on April 19th. Be kind to them.