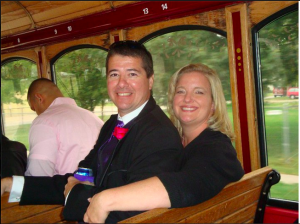 At about 3:30 this morning, my dear friend Gerald Hemphill passed away peacefully in his sleep.

The father of four girls, including my goddaughter, and husband to one of my very best lifetime friends – Misty Hemphill – he was diagnosed with colon cancer more than two years ago.

Stubborn as all get out and not willing to go down without a fight, he did everything in his power to win, even when the cancer spread to his liver and then the rest of his body.

In the last few months, he had tumors on his spine, which caused him an inordinate amount of pain and he lived his last days on the maximum amount of morphine.

About a year ago, he texted me and said, “This is not going to beat me. I want you to climb Pike’s Peak with me when I beat this.” And I promised him I would.

We never got to do that.

And he made me swear on my life I would be there to make sure they did what he expected them to do.

The last time I got to have a real conversation with him was on May 17 when they found new tumors in his right lung and colon. At that time, they were deciding on a new type of chemo and other drugs, but he knew the end was imminent.

The update from Misty on his CarePages this morning reads:

No more fighting, no more pain, my beautiful Gerald, the love of my life, the father to my many reasons to keep going, passed away this morning in his sleep. He was pronounced dead at 3:27 on October 19, 2012.

I’m going to miss you, buddy! I’ll climb Pike’s Peak with you someday. I promise.

I feel kind of silly posting this on today’s blog post, but I don’t want you to miss Spin Sucks if you’re so inclined.

Because Google is no longer supporting Feedburner, we have switched to Feedblitz.