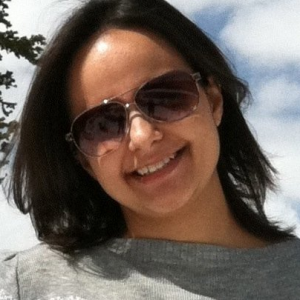 One of my most favorite people on earth is Ifdy Perez (who just celebrated a birthday on Wednesday).

I initially met her through Geoff Livingston, when he began working with Razoo. And we hit it off immediately.

She has a phenomenal sense of humor and is sharp as a tack.

During the holidays, her friend Christian went on his Christmas vacation and asked her to take care of his Hannukah bush, Carl (named after the kid in Walking Dead). She documented Carl’s life with her so Christian wouldn’t miss a thing while he was away.

He went on playdates, he ate his first solids (tortilla chips), he went on his first date, and even started using a sippy cup.

Seriously, it was one of the most creative – and hilarious – things I’ve ever seen.

And it won me over for eternity (sorry, Ifdy…you have me for life).

When she’s not documenting the life of a Hanukkah bush (or geeking out over The Dark Knight coming out), she is the community manager for Razoo.

This year she was responsible for Twive and Receive and, if memory serves me correctly, helped to organize and raise $400,000. In one day.

She believes in the power of social media to produce change, and in helping nonprofits do the important good works they do.

And she’s a frequent contributor to Gin and Topics, where she has a contest with Mark Wohlschlegel to see who can get the most videos included (which I didn’t know about until I saw them in DC last month and now I encourage the contest).

She’s an up-and-comer who you won’t want to miss getting to know.

So wish Ifdy a belated happy birthday and then check her out on Twitter, Google+, LinkedIn, Pinterest (I LOVE PINTEREST!!), and on Blip TV where she does an Ignite presentation on Give to the Max Day: Greater Washington.