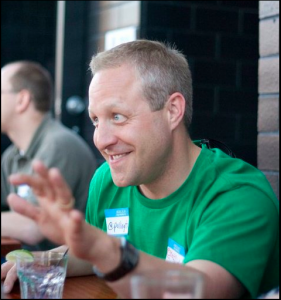 I was in LA a few months ago when I received a Facebook message from Keith Privette. He selflessly recommended a #FollowFriday for me.

At that point, I said to myself, “Add him to your list of those to recommend.”

And now his time has come.

He’s not a PR or marketing pro, which tend to be those who read Spin Sucks. Instead, he started started his career as a business analyst and has evolved to become a digital sociologist….or social business analyst, whichever your prefer.

At Stratactical Consulting, he works with companies to incorporate changing technologies into the businesses, which he was doing long before the term “social business” was trendy.

But, in my opinion, one of the most important things he is doing is getting startups and entrepreneurs involved in the Norfolk, Va., area.

Starting with Start Norfolk, he created an event to help businesses get started and off the ground. Just like they do in Silicon Valley, Austin, and a few other cities inclined to help startups, this annual event allows entrepreneurs to pitch their ideas and then form teams around getting them launched.

And, after the event (which was held in April this year), he extended the conversation to a Twitter chat so entrepreneurs can continue to get the mentoring they need as they grow.

His blog is not the typical social media echo chamber. Rather he spends his time promoting new companies, new ideas, and business in Norfolk. In fact, the latest blog post is about Founder Dating, an exclusive dating network for entrepreneurs that help you find your co-founder. Kind of a cool idea and they’re raising funds to support it now.

He is married with two kids and, even though it was sold as salvage, his RV (Pulling Tin) has a blog. I’m not joking. It’s pretty funny. You should check it out.

And check him out on Twitter, Google+, LinkedIn, Facebook, his blog…and in the comments here for the day!