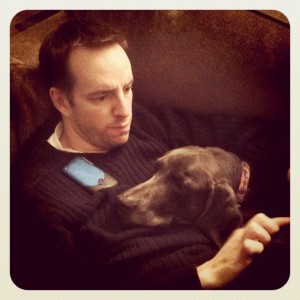 Please allow me to introduce you to Mr. D aka World’s Most Patient Man aka love of my life (well, he competes with Jack Bauer for that title).

It is Kelly’s birthday today. Because he’s not on any of the social networks (bane of my existence), it doesn’t make much sense to #FollowFriday him. But I thought it’d be fun to wish him a happy day anyway.

Kelly and I met 13 years ago in a dance club in Kansas City. He likes to say I picked him up on the dance floor. I’m sure there is some semblance of truth to that story (OK – I did). But I had a boyfriend and he had just gotten out of a relationship and so we became friends.

Friends who occasionally met for dinner. Friends who shared reading recommendations (I introduced him to Harry Potter). And friends who tearfully said goodbye when I moved to Chicago and he moved to D.C., just three weeks apart.

A few months after I moved, he sent me a note to say he was going to be in town and asked if I wanted to get together. I took him out to meet some of my friends and, late that night, my friend Michael Stern pulled me aside and said, “Why, on earth, are you not dating this guy?”

After that I looked at Kelly with new eyes and, just a few months later, we were engaged.

I always joke that people like him more than me, which is why I never bring him out. But it’s kind of true.

He’s an extrovert to the nth degree (it gets interesting in our house when I need alone time to recharge and he wants to be around people), he’s charismatic, he’s kind, and he is (by far) the funniest person I know. He never has any qualms going out with my “Twitter friends” when someone is in town or inviting them over for dinner or even have them stay in our guest room.

He treats every human being the same – it doesn’t matter if you run a multi-billon company or sleep on the street. Kelly has blinders on when it comes to that. And he’ll always look you in the eye when he talks to you.

He represents the perfect human being (minus the whole letting his clothes pile on the floor like he’s a teenager thing).

I hope you’ll join me in wishing him a very happy birthday!