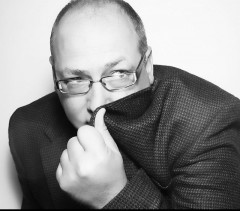 Four score and seven years ago, I met one Kevin Vandever.

OK, it wasn’t that long ago, but it was many years ago.

You see, when I first started on Twitter a thousand years ago, I met a group of people (Julio Varela, Justin Brackett, Sarah Robinson, Adrian Dayton) who became fast friends…and are still friends today.

Kevin Vandever was part of that group and someone I knew I had to find opportunities to see in person when they presented themselves.

Because of that, I’ve seen him in Chicago, La Jolla, and New Orleans, but have yet to see him in his hometown of Los Angeles.

The director of systems development (read: IT geek) at Behr (the paint company), Kevin is a man of many talents. He’s a winemaker, author, and father to a Juilliard student (which I think is the coolest thing EVER!).

His first book, Subfiles in Free-Format RPG (told you…IT geek), has two editions and is a comprehensive resource that can be used by RPG programmers as they advance from basic subfile usage to more advanced programming.

If you know what that means, you should buy his book. If you are completely clueless (like me), read on.

It gave him the writing bug and afforded him the ability to write a second book, which comes out next month.

He’s a North Carolina graduate so he and Mr. D aren’t allowed to ever meet (Mr. D went to Kansas and is still upset about the Roy Williams thing), but he’s a good, smart, funny man with impeccable taste in the red grape.

A man you should connect with as quickly as possible.

You can find him on Twitter, LinkedIn, Google+ (sort of), and The Book of Face.