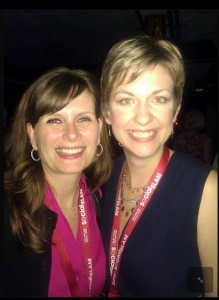 I know it was online (either Twitter or here on the blog), but I do remember when I finally got to meet her in April at SocialSlam in Knoxville.

And she was even more lovely in person than online.

When we first met, she was working full-time and also thinking about going out on her own to start Blue Kite Marketing. We had long conversations about making the decision, how to find clients, and when it was time to hire.

Like Mr. D and me, she and her husband are now a family of entrepreneurs. Which is both exciting and scary. If you have a rough year (like we did in 2010 and 2011), you’d better hope you don’t need to get a bank loan or refinance anything. Because they don’t look at how well you saved so you could pay your mortgage in lean years. They only look at the tax return from the previous year.

That’s something you aren’t told when you go out on your own. You won’t always have a consistent paycheck. And, some years, you won’t make a dime because it will be more important to keep the business afloat. So you’d better save well or you won’t make it.

So when both of you are entrepreneurs, the risk is even greater.

But so is the reward and, like I told Laura as she was thinking about this a year ago, the hardest part is making the decision to leave your job. After that’s done, the decisions are easier to make and you’re in charge of your own destiny. Forever.

It’s not just the dual entrepreneur family that draws me to Laura, though. She’s a runner and, while I’m now a cyclist, we have the same philosophy when it comes to taking care of our bodies and minds.

And she’s a reader. In fact, she just had a phenomenal idea to create a book running club. I can’t believe this doesn’t already exist. You spend a ton of time with your running partners. Why not all read the same book and discuss it during one of your long runs?

And, while Laura grew up on a farm in Missouri and I learned how to walk beans in the early years of my career, we can talk weed and insect control with the best of them.

But one little thing I have to mention – mostly so Mr. D doesn’t get upset – she went to the University of Missouri and he went to Kansas. So we can never have the two of you meet.

For everyone else, though? Check Laura out. You can find her on Twitter, Google+, LinkedIn, Pinterest, Slideshare, her blog, and in the comments here today. So say hello!