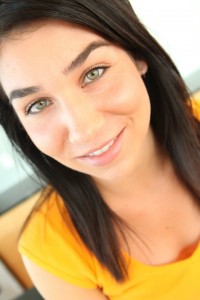 Last year, right about this time, I was standing in the grand hall at the conference center where BlogWorld was being held and I finally got to meet the incomparable Lisa Grimm.

After following one another on Twitter for quite some time, it was fun to finally see her. It was too brief.

But one thing I discovered about her then and have seen her demonstrate it every day since then: She really cares about our industry.

She does digital and social media for Mall of America (a job I can’t decide is really cool or super scary – I mean, people everywhere!). I don’t spend much time on mall websites (I’d rather kill myself than go to one, especially the world’s largest), but I’ve spent some time checking out the work Lisa does and, well, I’m impressed!

Get this. They have a blog. The mall has a blog, where Lisa and her team update multiple times a day. They have things you can buy for less than $100, a pick of the week, and events happening at the mall. Talk about some ideas you can steal from them – they are using content to interest their audience that also features their vendors. Pretty stinking cool!

But you know what I like best about everything they’re doing online? They are engaging with their fans, followers, and connections.

Lisa is at the forefront of this and you can tell, just by reading the streams, she knows what she’s doing and she spends time on the social networks personally. A distinction so important because it’s difficult to execute digital programs without having done it for yourself.

She’s one of the good guys. She knows what she’s doing. And she’s really nice, too.

So check her out on Twitter, LinkedIn, Google+, and her blog (even though she hasn’t update in several months…it’s still really good content).