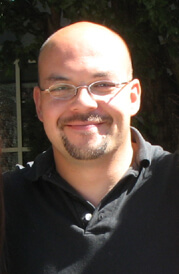 I have never done a #FollowFriday for someone I just met. My feeling on recommendations is I give you someone I know really well so you trust that everyone highlighted here has been through a certain amount of vetting.

So I hope you’ll forgive me for introducing you today to Pat Rhoads, a man who, though I’ve been following him on Twitter, smacked me in the face (figuratively) in the comments of Spin Sucks yesterday.

If you missed the blog post, The Atlantic did a piece on whether or not Facebook is making us lonely and I riffed on it. You see, I’m torn. I think the social networks open up a world generations before us never knew, but it’s also frustrating as heck when you’re at dinner with people, live and in person, and they spend the whole meal documenting your time together on Facebook or Twitter.

But Pat. Pat made me think.

Here’s what he said: 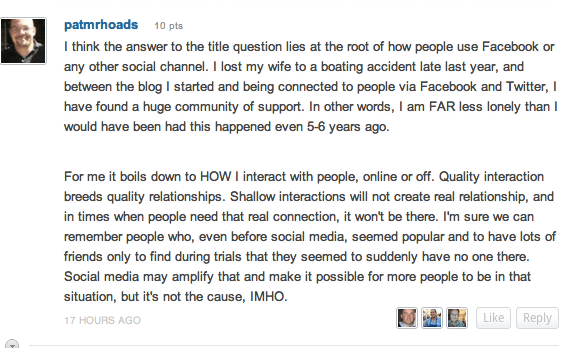 A really good example of how social media, and his blog, helped keep him going, wouldn’t you say?

Lisa Gerber emailed me and said she had online stalked Pat and spent 10 minutes sobbing her eyes out when she found his personal blog. I told her I wasn’t going to read it. And then I did. And my reaction was the same.

Missing Aimee is a blog he set up the day after his wife passed away, a week before Christmas last year. He wrote one of his first blog posts on the flight home from the trip where the accident happened, detailing what he was able to put together about the accident.

The very first blog post was written the day after it happened and you can find it here. You’ll also find Pat’s and Rowan’s (their daughter) first Christmas without Aimee, and their anniversary, and Valentine’s Day, and her birthday, and Mother’s Day.

I’m sure Pat doesn’t want you to feel sorry for him, nor does he want you to think he’s doing this for sympathy. I say this because the way he writes is not self-pity at all. But I do think the way he’s using the social web to connect with people in order to heal is amazing and strong and unbelievable.

I highly recommend you take 10 minutes today and stop by to say hello to him. I promise you, you won’t regret it.