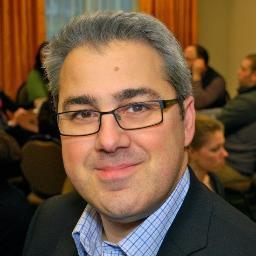 Please allow me to introduce you to one Mr. Sam Fiorella.

I, however, know him as one of my favorite Canadians who is wicked smart, extremely opinionated (in the right way), a terrible speller (which gives me tons of great fodder for teasing him), and a Bills fan (poor thing).

He also has a great sense of humor. When I was scheduled as the guest on Heckler’s Hangout with Margie Clayman and Brian Vickery, Sam logged in and wrote his title as, “Gini Dietrich and I dated in college.”

We didn’t. He’s waaaaaaaay older than me. But for the audience, it was hilarious to see people’s reaction. Everyone did a double take, but no one asked about it. I guess they thought it was inappropriate to bring it up. Which actually makes it even more funny.

On the professional side, Sam is in charge of customer experience for the Sensei Marketing clients and he’s a big proponent of influence (measured in the right ways) and how it affects sales for an organization. In fact, you could say he’s the Big Cheese because their sole goal is to build the value of their client’s businesses by improving customer experience.

The business is named after a sensei because one, “Guides, educates, and inspires followers with a mastery of their discipline that has been honed during the years with a singular focus and dedication.”

He’s a great guy who you’ll learn from, laugh with, and poke fun at mutual friends together. I highly recommend getting to know him, especially before his and Danny’s book comes out and he becomes even more famous.

You can find him on Twitter, LinkedIn, Google+, and on the Sensei blog.