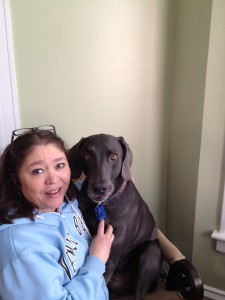 About five years ago, I was in a meeting with my Vistage Chair and he told me it was time to hire an assistant.

I remember thinking there was no way I’d have enough work for one person to do full-time and I pushed back on the idea.

But he persisted and, in each meeting, asked me what I’d done that month that I either wasn’t good at doing or was taking a lot of time away from allowing me to grow the business.

I mentioned the idea to my good friend, Scott Farrell, who sent me the resume of one Patti Knight.

So  I called Patti and invited her in for an interview.

On the day of her interview, I heard her in the lobby talking to Jack Bauer. You see, he’s a MUCH better judge of people’s character than I am so we always make sure he’s around when we interview.

But Patti. Patti was talking to Jack Bauer as if he were a person (he thinks he is) and, when I walked out there to introduce myself, she was kneeling on the floor, scratching his ears, and he was licking her face.

He does not do that. He’s a big, fat momma’s boy and doesn’t cheat on me.

But there he was, cheating on me with this stranger.

I think it took me less than 15 minutes to decide to take a chance with Patti and, four years ago tomorrow, she joined the team.

What a chance, huh?

She quickly became my work wife and I wondered how I did my job without her. It turned out my Vistage Chair was right. Not only did I have enough for her to do, I began to entrust her with very sensitive items, including personnel files and financials.

When the economy tanked and we lost half our clients, the organization was fat. It was Patti’s job to trim expenses to the point that we could be profitable again. It took her more than two years to do it, but she went way above and beyond the call of duty and, with her help, we’re not only growing this year, but also profitable for the first time in years.

If you do any work with us, contact me for any reason, or need our help, it’s likely you’ve talked to Patti.

Please join me in not only congratulating her on four years with us, but also in wishing her a very happy birthday!