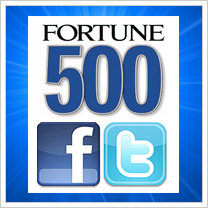 Some of you may have seen the report last week that shows 70 percent of Fortune 500 executives aren’t using social media.

I’m not sure why we needed a study to tell us this. I mean, really. Is that a surprise?

Fortune 500 executives have one job: To grow the company and provide value to its stockholders. They have teams of people who build the brand and communicate with customers and protect the reputation.

Big company leaders have never sat in the customer service center and taken phone calls or emailed back and forth with upset buyers (with the exception of Steve Jobs who did it with great joy).

So why do we expect them to be using social media?

In fact, the more time I spend on the road with business leaders of companies of every size, it’s more and more apparent no one at the top is using these tools to communicate with their families, let alone their customers.

It is a completely different conversation than it was four years ago, when I began my speaking career. I remember one entrepreneur told me the hardest job is the one holding the lantern while leading everyone down a dark path.

But is it up to them to be the ones using it on behalf of the companies they lead?

There are some interesting stats from the survey:

Is it with Ease?

We’re straddling at least four (if not five) different generations at work right now. The Traditionalists and Baby Boomers do not understand how social media can affect their business growth. They are now beginning to understand why they should be considering it, but asking them to participate is akin to rewiring their brains: In some cases, it’s impossible.

Even my peers, the Gen Xers, are resistant. We didn’t grow up with technology; most of us got email either late in college or not until after we began our careers. Taking a computer class meant learning how to code on DOS.

So using the computer to communicate is about as foreign as learning a new language.

Grow Your Company or Be Active on Social Media

Mitch Joel asked that very question on a blog post he wrote about the topic last week: Should you grow your company or be active on social media?

For instance, I run a growing company and I use social media to communicate with prospects, clients, my team, and even competitors. But does that mean Mr. Fortune 500 CEO has to do the same?

Should every company be using the tools their customers are using to communicate? Absolutely!

Should it be the CEO managing those tools? Not necessarily.

If the leader has the time and the wherewithal AND sees a return on their investment (i.e. increased revenues, improved margins, or a shortened sales cycle), by all means, tweet away! But there are plenty of people inside these organizations who can manage it, as long as the strategy is led by the corner office.