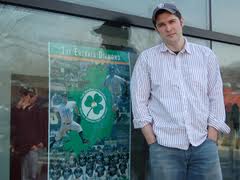 Like most young wannabe filmmakers, I learned the basics of screenwriting by hanging out on film sets and reading books.

Books such as Syd Field‘s 1979 treatise on the three-act dramatic structure, simply titled Screenplay. Fields contends that writers must follow a rigid three-act structure in order to free themselves to develop their characters.

Twitter’s 140-character limit is not unlike the three-act structure in screenwriting. It’s rigidity forces the writer to be disciplined and economical with words while creating a strong visual to convey the story.

The challenge in great storytelling is two-fold:

What would happen if you applied the storytelling principles of Screenplay in your every day Twitter usage?

Oh, and another thing; Too much dialogue usually is the sign of a bad script. Tweet only when you have something useful to say.

By keeping things visual, your tweets can carry the story of your business farther and help you connect with customers.

John Fitzgerald is a documentary filmmaker. He produced The Emerald Diamond (2006) about the quirky history of Ireland’s National Baseball Team and Playing for Peanuts (2009) about a pro baseball team struggling to survive in an now defunct league. He learned social media by promoting his work back in the heyday of MySpace and AOL and currently serves as a social media consultant to several pro baseball teams and non-profits.