My Saturday morning tradition dating back to my childhood is to wake up slowly, watching some classic Canadiana on CTV.

At 9:00 and 9:30, CTV2 plays back-to-back episodes of The Littlest Hobo, otherwise known as The Greatest Canadian TV Show of All Time.

If you don’t know of it, a quick search on the YouTubes (or clicking above) should sort you right out.

So Saturday, I brewed a pot of the finest locally roasted, fair trade coffee, and settled in for some sweet Hobo action.

This week, it was a particularly thrilling episode.

A group of young children, out playing a role playing game (LARPing before it was a thing!), end up in dire straits and in need of a rescuing paw.

Some dangerous animals escaped from a local collector and these children come across an alligator, boa constrictor, and Komodo dragon – all in the wilds of Ontario! Luckily, The Hobo, called Blink Dog for this episode, is there to help out.

Thrilled with another action packed episode of The Littlest H, I took to the interwebz to regale my friends with a synopsis of this thrilling tale.

Instantly Bob LeDrew weighs in – “Is that the episode with Princess Theaella?” I squeal in excitement – usually only my brother Stew knows the Littlest Hobo cannon as I do. I reply an enthusiastic response to Bob, and then… he copies the actress who played Princess Theaella in to the conversation!!! Mind = blown.

And this, my friends, is one of the many reasons I love being Canadian – your favorite childhood actress is usually not more than one degree away. 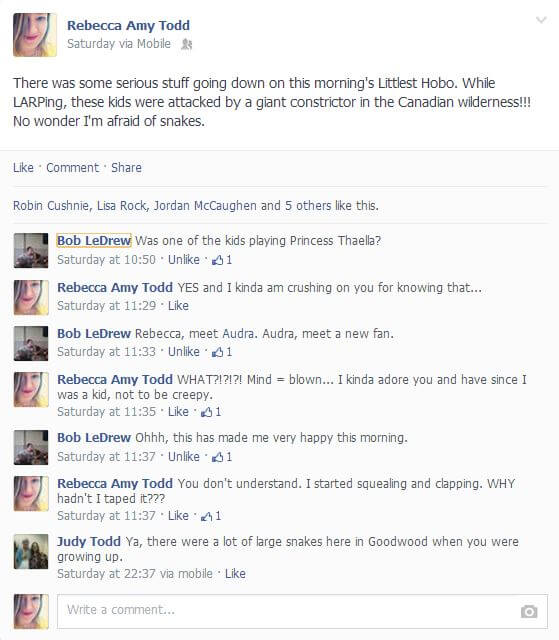 This week’s Gin and Topics videos are brought to you by Paul Seale, Olivier Blanchard, Susan Cellura, Dwayne Alicie, me, and my Mum. Enjoy!

5. Puppy Tummy Slide! I adopted my labra-dork at a little more than a year old, so missed what must have been a ridiculous puppyhood. I adore this little video- look at the twirling tail of pure happiness!

4. Swedish Police. There are lots of reasons to appreciate Sweden – their solid education system, Alexander Skaarsgard, their fabulous healthcare, Stellan Skaarsgard, the Nobel prize. I love this video that shows the approachability of the Swedish Police. This officer seems like someone who really enjoys serving his community. (Ed’s Note: And he’s not hard on the eyes either!)

3. Blurred Lines/Mod Carousel. There’s a lot of controversy about the Blurred Lines song and video. Some say the lyrics are promoting “rape culture” and that the video is filth. So, Seattle-based Boylesque troop Mod Carousel decided to flip this video around, grabbing female burlesque sensations to rerecord the vocals, while the men do re-enactment of the video. I love both versions, personally, and Mod Carousel have made theirs available for a free download, too.

2. How to Take a Photo. For their upcoming new season, Key & Peele are invited to interview for a story, but instead find themselves being asked how to take a photo. While I’m certain this is staged, it’s pretty funny to watch them “counsel” the interviewers on the right photos to take, everything from a photo bomb to a flexible man with a head coming out of his bum.

1. Eleven-Year-Old in Yemen – Every time I host Gin and Topics, my mum suggests something light, and also something serious. I found this video on the Atheist Media blog this week, and was wowed. I have nine nieces and nephews, some very close in age to this young lady. Imagine having your family marry you off against your will at 11! The courage of this young woman is phenomenal. My mum thinks her story should be shared, and I agree.