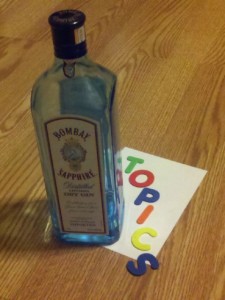 Will it surprise any of you to learn that I rode the short bus? (Editor’s Note: Not that there’s anything wrong with that.)

Naw, somehow I didn’t think so.

As I’ve gone on about in the past, I am from a small town. So small, in fact, it is not a town, but a hamlet.

Not a “to be or not to be” soliloquizing Hamlet, but a small community in the middle of absolutely nowhere. Mine is called “Goodwood”- you can try, but I’ve heard all the jokes already.

We have a school in Goodwood, which my older siblings all attended, my father was once the principal, and three of the next generation of Todds have also attended.

It is small and convenient and within walking distance…so of course it would not do for RAT.

Naw, I needed to be exported. First to a French immersion school, then off to the big wild city of Pickering for an enrichment program. Oh I know you all did air quotes for that…sure, RAT, an “enrichment” program.

Pulled from all across our school district, this big city experience was vastly different from my growing up years. I was suddenly in school with people from a variety of backgrounds, experiences, and nationalities. Goodwood isn’t really known for its diversity.

In order to get there, yes, I rode the short bus with Robin Carswell.

Being in this program was a wild experience for me. I met so many incredible people, ones  I stay connected with still. Members of this class have exploded like fireworks out in to the world – architects and scientists and venture capitalists…teachers and paramedics and rock stars…and moi. To isolate just one person from that group does a disservice to the whole, but that’s exactly what I shall do…

This week your videos come from Brook Fletcher, Chris Mortimer, and moi.

5. The Sweet Ones. This week, for number five you get a two’fer! Sarah Slean was one member of my class in Pickering. From grades three through six, we were really close. Close enough, in fact, to do a complete rendition of the musical Cats! for my family in grade three. Right after the house burned down. In the small house trailer we were currently calling “home”…whilst playing nine roles in that performances of Cats! may in fact have been the height of my musical career, Ms. Slean has gone on to thrill audiences with her intelligent and heartfelt music for years.

I saw this first video months back- two young fans submitted a lovely cover of one of Sarah’s songs. The second video was a surprise from Sarah to those same fans when she played their town. Watching the expression on Sarah’s face as she encourages these two young girls shows just what in incredible woman she’s grown to be. You can raise your kids on Miley, or you can raise them on Sarah S. Your call, really…

3. Yoga Breakdancing. I (sometimes!) do a lot of yoga. It’s truly amazing what a solid practice can do for you, body and mind. Often (but not always!) when you mention yoga to a man, first they get that far-away “did you just say Kama Sutra?” look, quickly followed by something about how yoga is for women. HAH! I gotta tell you, men, being male in a yoga class has a whole bunch of benefits…and if you don’t believe me- check out this young man, his incredible core strength, and amazing control…see you in class! Namaste.

2. Chase Utley Wins the Interwebz. If you don’t watch It’s Always Sunny in Philadelphia, you are mos def missing out. Remedy that forthwith! One of the characters on the show, Mac, wrote a letter to the Phillies’ Chase Utley a few seasons back. Here, Chase records a video reply. I really don’t know how he kept a straight face!

1. Robert Downey Jr. and Sting. Let the ultimate battle for RDJ’s affections continue! If it isn’t enough that he rocks a suit and makes sequins look sexy, he SINGS LIKE THIS. I can even get past the Stingy-ness of it all to watch this again and again and again… Your move, Lil G… (Note from Gini: I know where you sleep, RAT. Don’t think I won’t suffocate you to death if you go near my RDJ!)

NOTE from Lindsay: Please feel free to email your video finds to me, as well as Gini, each week! I’ll be working with Gin and Topics guest writers until the beginning of October, and it’s a huge help. I can be reached at [email protected]