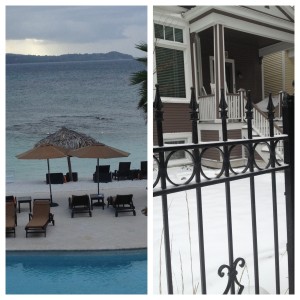 Boy! What a difference one week makes!

Jamaica last week. Snow this week. I’m certainly not complaining – I got the best of both worlds in a matter of seven days.

But look at the difference!

It’s been a kind of quiet week, particularly for those who had to stuff five days into four. Hope it was as productive for all of you as it was for me.

With that, I give you Gin and Topics. And don’t forget! If you have a video you think should be included in here, send it to me!

5. Mother Convinces Michael Buble to Let Her Son Sing. This is freaking amazing. At a Michael Buble concert, a woman in the audience talks the singer into bringing her son on stage. The look on his face is priceless when the kid sings along.

4. Car Goes through Ice. This made my entire morning! I love how you understand nothing about what the guy is saying until he says one priceless swear word.

3. Harlem Shake (Med-Syd Edition. I know some of you are sick of the Harlem Shake already, but I had to include this because it’s Martin Waxman’s daughter’s dorm at the University of Western Ontario. Famous kids!

2. Downton Arby’s. You may have already seen this, but it makes me laugh every time I watch it. I LOVE the Edith character. Hilarious!

1. Miami Dolphins Cheerleaders vs. U.S. Military. This is, by far, the best Call Me, Maybe skit I’ve seen. I might appreciate it more in light of yesterday’s women’s equality blog post, but man! Those guys must have practiced forever to get the moves down exactly right. I mean, hair flips and everything. It’s a beautiful piece of work.

Have a happy snowy (or not) weekend, everyone!