How is it Friday again already?

Lisa Gerber and I were chatting earlier this week about how quickly time is going by.

Does it not feel like we were just setting New Year’s resolutions? And yet, here we are, nearly at August. Man.

So, in honor of one of the last few weeks of summer, I give you some very fun Gin and Topics, including my boyfriend, Robert Downey Jr.

Did someone say Robert Downey Jr? Be still my beating heart!

I mean, here are your Gin and Topics.

5. Robert Downey Jr. Dances Into Comic Con Hall. OK. I have to run him first because I really, really love him! Geoff Livingston and I were doing a webinar for SNCR yesterday in which he mentioned the Avengers. And made it widely known there that I love Ironman. Any little bit helps…he’s on my top five list, which means if anyone helps me meet him (and he wants to sleep with me), I get a pass! I guess I should have been hanging out at Comic Con. I would have seen him there for sure.

4. Dad Lulls Baby to Sleep with Metallica. This might be the cutest thing I have ever seen. A dad plays acoustic Metallica to his baby, while she sings along and eventually falls asleep. If it doesn’t warm your heart, you’re clearly an alien. Thanks to Jack Steiner for the share!

2. Husband Left Us. Not a video, but this is just fantastic. A guy cheated on his wife with a much younger woman, which resulted in divorce and having to sell the family home. This is the for sale sign. I know some of you have wanted to do this! Thanks to Joe Hackman for encouraging its place in Gin and Topics today. 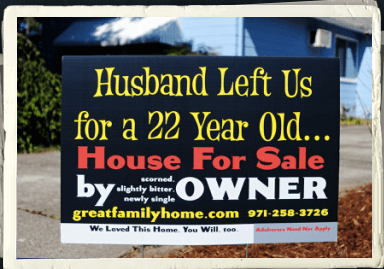 1.  Kids Think Social Media is Stupid. Oh did I save the best for last. Ken Mueller sent this to me and let’s just say I don’t want to ruin it for you (other than saying one kid thinks a hashtag is food and tastes like mashed potatoes). This. Is. Freaking. Hilarious.

Have a great weekend, everyone! It’s going to go by quickly so savor it.