Many of you know I LOVE MONKEYS (cough, Jason Konopinski, cough) and you may have already seen this image floating around Facebook, but I just had to share it here…as a special addition to Gin and Topics. 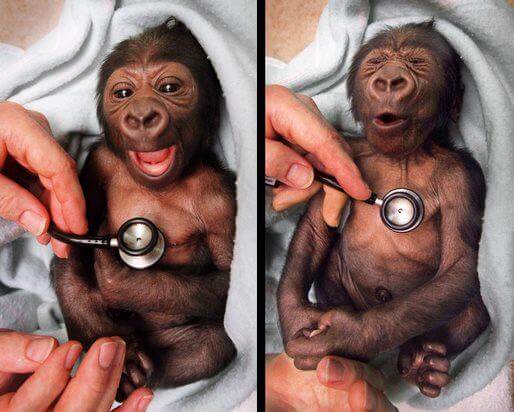 Every time I see this posted on another person’s Facebook page, I squeal. I mean, look at him! Cutest. Thing. Ever.

It makes me want one! I wonder if he and Jack Bauer would get along? I could walk Jack Bauer on a leash and hold my monkey’s hand, and we could share ice cream cones. It would be grand!

Alright. So on to the weekly specials. We have tight pants, a seal dancing to Michael Jackson, a song about the differences in women ages 29 and 31, a kid who has to apologize to a plane full of people, and a skinny white kid rapping about his bike.

5. A Fight Over Tight Pants. Holy. Cow. So this is what it’s like when your friends are celebrities and you have an audience and you can totally make fun of hipsters and tight pants. Kyle Akerman sent me this Jimmy Fallon clip where he fights with Will Ferrell over whose tight pants are the best. Trust me. It may be the second best thing you see all week (behind the monkey, of course)!

4. Seal Dances to Michael Jackson. I guess I’m pretty predictable because Claudia Scimeca sent this to me, knowing full well it would make it in Gin and Topics (I don’t just love monkeys; I also love dancing animals). But wait until you see it! It’s a seal dancing to Michael Jackson’s “Smooth Criminal.” I mean, it could be MJ reincarnated. Super freaking awesome!

3. 29/31 by Garfunkel and Oates. I think I’ve watched this at least five times because it’s H-I-larious! It’s two women – one aged 29 and the other 31 – singing about the differences between the ages, when it comes to love, wedding, and a marriage. At 29, you think you have all the time in the world to find “the one,” but by 31, you’re desperate and ready to settle down with cats. It’s funny because it’s true. And Konopinski gets a second nod from me today because he also sent me this (which I then sent to my sister-in-law, who just turned 30).

2. Kid Apologizes to Plane for Cutting in Line. We’ve all been there. The person who cuts in line, particularly in security at the airport or at the grocery store or at a sporting event, and everyone shakes their head and looks at one another, but no one says anything. Well, this kid did it to get on to a Southwest flight with his buddies, his coach caught him, and they made him apologize to the entire plane, over the sound system, once it was ready to take off. Thanks to Ken Mueller for the find!

1. Performance by MC Spandex. I fully understand you might not appreciate this last one if you’re not a cyclist, but my dad sent it to me and I find great humor in it. It’s a skinny white guy rapping about why his bike is better than yours. And, when I had to stop on a dime during a ride earlier this week, I began to hum this tune.

Have a great weekend, everyone!