A long, long time ago, when I switched my Twitter handle from BearsFan07 to ginidietrich, I met a handful of people who’ve become in real life friends.

One of those people is Justin Brackett. Justin celebrated a birthday yesterday so I thought to honor him I would show you what he did last week and posted to Facebook (which was then shared and reshared and reshared). 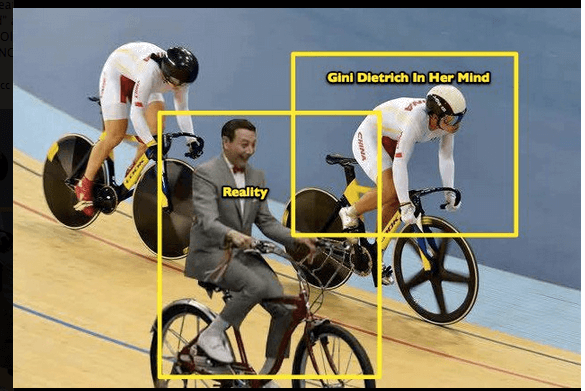 This may be the most brilliant thing he’s ever created. So go ahead. Laugh it up.  And wish Justin a very happy birthday!

And, with that, I give you Gin and Topics.

5. Call Me, Maybe? Chatroulette Version. Speaking of Justin, after he made that nice little image above, he posted this on my Facebook wall, as if he was really saying, “I’m sorry. Forgive me?” For those of you who don’t know Chatroulette, it’s a video chat room where the people you interact with are totally random. This guy, well, nothing I can say does it justice. So just watch. You’ll never listen to this song the same again.

4. Happiest Olympic Worker. The Olympics are over, but that doesn’t make this any less awesome. A worker is assigned the job of using a bullhorn to direct people, but she creates her own script. Ryan Cox thought you’d like it and I have to agree with him (this time).

3. The Flash Mob Proposal. I love flash mobs. I will never get tired of them. Todd Lyden knows this so he made sure I saw this flash mob proposal. But the best part? The whole thing is choreographed and planned, but then the whole town joins in…totally unplanned. Also, I want to know where you live that a main street can be shut down like this for a good 10 minutes.

2. Camera Swims with Dolphins. Deb Dobson sent this to me and it is I-N-C-R-E-D-I-B-L-E! Some guys were out fishing for tuna when their camera got hijacked by a school of dolphin. What you see, from the camera’s point-of-view almost doesn’t look real. Go swim with the dolphins!

1. Buttermilk “Plays” with Her “Friends.” This is super cute! I think the goat may have ADHD. All her friends are just hanging out and she’s bouncing off the walls! You can thank Marianne Griebler for the find.