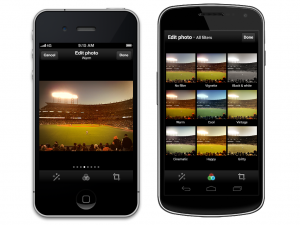 I love social media. I love what it’s allowed us to do for both this blog and Arment Dietrich. I love the people I’ve met and the people I’ve hired because of it. I love nearly everything about it, except…the social networks copying each other is driving me crazy.

First, Facebook took a stab at my beloved Pinterest with Collections (and then removed it for further testing).

Last week Google+ introduced communities. Great. So now I have to go to both Facebook and Google+ to talk to the same people I talk to in private groups on Facebook.

It’s as though they’re each sitting in their board meetings saying, “How can we get everyone to use our site instead of our competitor’s sites?”

I get it. I do. I want clients to hire us instead of our competitors. But we’re not trying to be all things to all people. What happened to specializing?

Putting my cynicism aside (I clearly need some time off of work), it is valuable to look at what both Communities and Twitter photos bring.

Communities lets you create just that – groups of people who have similar interests – in order to brainstorm, trade ideas, or just chat.

While I’m not a huge Google+ fan (though I do love it for its search capabilities), I do love the Google business model. They know the more people who use their products, the more they can charge advertisers. So they see us as the product, instead of the user, and they provide lots of cool things to us for free.

With communities, they’re now encouraging the tech and social media geeks to share Google+ with their friends and family…bringing more people to the site.

Kind of brilliant if we weren’t already established in Facebook groups with the same friends and family.

Last week, Twitter killed the integration of Instagram on its site. So you can no longer share your photos directly to Twitter (though Shelly Kramer has an awesome IFTTT workaround, if you want to continue doing it).

It’s rumored they’re doing this because the VITs (very important tweeters), such as celebrities, have larger followings on Instagram so they’re hoping those people will come to Twitter to share and view photos.

According to the Twitter blog, this is what you’ll get if you use the photo filters right within the social network:

Filters. Apply one of eight filters, ranging from black & white to vintage, to add a new look and feel to your photos.

Take a bird’s-eye view. See how each filter would affect your photo in a single grid view, or swipe through looks to compare your options.

Frame the action. Crop and pinch to zoom in order to focus attention.

Auto-enhance. Make your photos pop with balanced light and colors by tapping the wand.

I don’t know how it will change my own personal social experience. I do know we won’t recommend clients jump on the bandwagons just yet. What about you?

(Ignore this, I’m testing something with SEO. Connect with Gini on Google+.)