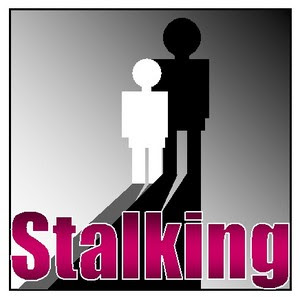 “You were wearing a black suit, a blue and white checked shirt, black pantyhose, and black and white heels with a peep toe.”

I sat up straight in bed. A man’s voice I didn’t recognize knew exactly what I wore to work that day.  He called to tell me about it and then hung up.

He had my home phone number.

He knew what I was wearing!

I called the police. “I’m sorry, ma’am,” she said, “There isn’t anything we can do about a phone call.”

And so I tried to go back to sleep, with every light in my apartment turned on.

This happened night after night. Me being awakened in the middle of the night to a man’s voice on the other end of the phone, telling me what I’d been wearing that day, where I’d gone, who I’d been with.

And there wasn’t anything the police could do.

So I changed my phone number.

And then he started following me. I noticed him one day, when I was out running errands. A red Nissan Sentra. Following me everywhere. So I found the nearest police station and drove into the parking lot.

I went inside and he drove away.

Same thing. “I’m sorry, ma’am. There isn’t anything we can do unless he attacks you.”

Unless he attacks me? Are you serious?

And then he poisoned my dog. The poor puppy almost died.

Again. “I’m sorry, ma’am. There isn’t anything we can do unless he attacks YOU.”

We finally got the guy when he put cameras in my closet and my bathroom. I was getting dressed one morning and I noticed a little black, almost headphone-looking thing. I tried picking it up and it was attached to a cord that went into my wall and up through my ceiling.

Even though he never attacked me, it was enough for the police that he was watching me shower and get dressed. Finally.

But some people aren’t so lucky.

Jodi’s Voice was set up out of tragedy. It was named after Jodi Sanderholm, who was murdered by a stalker who had been watching her for 10 years.

Jodi was only 19 when she died, which meant she had been watched by her killer since she was nine years old.

Sadly, this is commonplace among stalking victims. In the U.S. alone, 14 in every 1,000 women of 18 and older are victims of stalking.

And these are only the reported ones.

For Jodi, it was too late. But through Jodi’s Voice, we can help make sure her tragic death is one that helped change the way the law deals with stalkers.

How You Can Help

On June 23, Jodi’s Voice will be having an event in Las Vegas called Fight Stalking in partnership with Sky Combat Ace. Celebrities from the world of entertainment will be going up against each other in aerial combat. Supporters of each celebrity can back their champions with donations and messages of support, and the funds raised will go to Jodi’s Voice.

And it’s the June event for Danny Brown’s 12for12K, an organization that aims to raise a minimum of $12,000 for a different charity each month.

You can help by:

If you have your own story, or know someone that does, I’d love to read about it in the comments below or provide a link to your blog post about it. Anything you can do to help raise awareness is great.

Perhaps we can even get laws changed so it doesn’t take an attack or a murder before something is done.