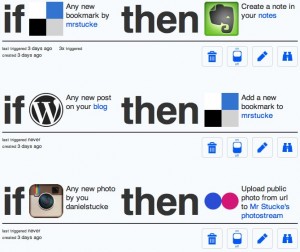 Yesterday, when I wrote about IFTTT and how Twitter is locking them out of their API, lots of you said, “What the heck is this tool?”

I was super excited to hear this because I thought I was behind the eight ball on it and couldn’t talk about it.

But you did not disappoint and now I get to show you this waaaaaaay cool tool!

IFTTT stands for “if this, then that.” It allows you to create, what they call, recipes to “put the Internet to work for you.”

If you use different social networks, RSS readers, writing tools, or the cloud, IFTTT allows you to automate some of the things that make you more efficient.

For instance, I live in the Windy City. It’s pretty important I know how hard the wind is blowing before I go out for a bike ride. If it’s more than 30 miles an hour, I know I’m going to either get knocked off my bike (which will hurt) or I will be riding into a headwind and it will be like climbing up to the top of Pike’s Peak.

So I have a recipe that texts me when the wind is blowing more than 20 mph and it also tells me from which direction. This morning, I received a text that said, “The wind blows! 24 mph from the Northeast!”

Barrett Rossie commented yesterday that he has a recipe set up to alert him when someone new follows him on Twitter, but not just that…it also puts them in a list so he can check them out.

There are endless recipes you can create and you don’t have to be a social media geek to use it. For instance, Mr. D (who is a technology Luddite and the bane of my existence) has a recipe to tell him the ratings of the weekend’s released movies.

Other recipes you can create:

As you can see, this isn’t just for the super, uber nerds like me (or, as Howie Goldfarb calls me, a “closet techie”).

Right now it has nine active channels with nearly 300 different recipe combinations. As the site grows, it has the opportunity to add another 46 channels, opening the recipes to thousands of cool things you can do.

But I must warn you: Block out at least 30 minutes to get on there. You’ll be sucked in. Quickly.