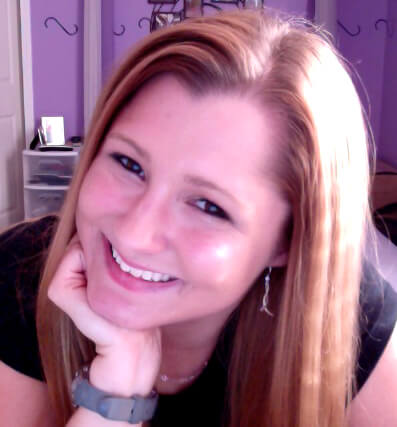 Once a month, I am using the Spin Sucks Inquisition to introduce you to members of our team.

This week, we have Amber Turner, the founder of January Creative, a graphic design and web development firm in Nashville.

I met Amber through Joe Hackman, who has been working with us for several years and is one of my closest advisers.

She does the web design work for us and for many of our clients—including a new Arment Dietrich website, which will be unveiled next month. She is creative, energetic, and fun to work with.

I asked her to sit on the Inquisition hot seat so you could learn more about her and consider her for any of your future web design needs.

(I have to say, her answer to cutting your life short is one of the best in this series.)

Probably not a mistake, but a regret.

I wish I would have gotten done with college earlier than I did.

I double majored, so I was in school for six years.

I didn’t do any summer classes or anything until my last two years of school. Had I taken classes during summer or winter terms, I would have finished school earlier, and moved on to building my business full-time sooner.

I’m hearing impaired and I have a speech impediment.

Most people don’t know these things (I don’t wear a hearing aid), but it often surprises them when they find out.

I remember telling one of my really good professors my last semester of college that I was hearing impaired. He had no idea and was shocked because he had known me for six years and I was in many of his classes.

The hearing impairment is the No. 1 reason I hate talking on the phone. Half the time I can’t always hear the other person, and the other half I’m trying really hard not to mess up a word.

Also, I am a math nerd. Not the really complicated stuff, but things you use everyday, like measuring, budgeting, and calculating.

I would not make the trade because…

While having a successful career, a loving family, and a cushy retirement are great and are major accomplishments in-and-of themselves, wouldn’t experiencing life and everything it has to offer be an achievement too, instead of cutting it short by 10 years just to achieve what you think is important now?

Two: Life forces you to see things differently as you grow up and mature.

Ten years ago I was just experimenting with the idea of design as a career. I didn’t know I wanted to be self-employed or ever thought I would start a business (let alone a rapidly growing one).

I never imagined myself to be writer and to be a published author.

I wouldn’t want to cut my time short and short-change myself on only the achievements I want now.

It would be very selfish of me to cut that time short just to achieve my goals.

Well, let’s just open that can of worms, shall we?

There are actually two things that really irk me in my industry (graphic and web design/development).

First: The idea that Photoshop is the best design tool.

Photoshop is a horrible design tool (print or web).

It is a pixel-based program that was never designed to be a design tool.

Granted, most designers just used it because it was the best tool at the time.

With design needing to be more fluid in nature, designers need to let go of the strangle-hold on Photoshop and move on to other tools.

My weapon of choice for print and web design? Illustrator—a vector based program.

With the idea of responsive web design, one theory is to develop for mobile first, then move up to tablets, then desktops, then larger formats.

Shouldn’t each website be developed based on how users will use the site and how content should be delivered, instead of the device on which users will see the site?

Devices are changing faster and faster, so why be dependent on a “mobile” device who’s definition of “mobile” has changed at least three times in three years (i.e. tablets, Google Glass, smart watches).

We should be more content-first in any development for the web (websites, apps) instead of device-first.

The best book I have almost finished reading is The $100 Startup by Chris Guillebeau.

It piqued my interest because I’m always looking to start new projects.

Anytime you have to put spin on something, then something is wrong.

If you feel the need to lie or distort the truth about what is actually happening, then you’ve either messed up and don’t want to face the consequences, or really don’t have something compelling to say to begin with.

With consumers and the general public becoming more and more in-tune with their moral compass’ and judging others against it, the harder it is for any spin to be effective.

Chances are, someone will smell your spin stink from a mile away, so why even bother?

Where You Can Find Amber Turner