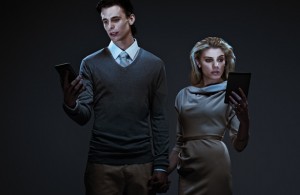 Earlier this month, there was an article in The Atlantic written about Facebook…and it’s effect on our loneliness.

The article begins by telling the story of Yvette Vickers, the former Playmate and actress who was found dead in her home a year after she died. Her computer was still on and, when they checked her phone to see who she might have talked to before she died, they found she called distant fans who found her via the web instead of her “real” family or friends.

Of course, this makes the assumption she knew she was about to die. The coroner later released the autopsy study that shows she died of heart disease. More likely, she was just going about her day so, in her mind, wasn’t really making her last calls to distant fans.

While her connections late in her life had increased, the article claims they were more shallow, “as has happened for many of us.” We’re extremely accessible now, but it seems we are more isolated: A contradiction in the sense that the more connected we are, the more lonely we become. “We were promised a global village; instead we inhabit the drab cul-de-sacs and endless freeways of a vast suburb of information.”

Facebook is closing in on one billion users, as they begin their roadshow for the initial public offering. They’re rumored to be valued at $104 billion and think they’ll raise $16 billion when they go public…the largest Internet offering in history. Last summer it became the first website to reach one trillion pageviews (TRILLION) and nearly three billion likes and comments every day.

Most of us use the social network. Many of us are addicted to it (cough, me, cough). We struggle with accepting, or ignoring, friend requests and some even obsess over who is unfriending them on a daily basis. The more we use it, the more comfortable we become with it and our boundaries change on what is acceptable and what is not.

We now live in this very strange world where we consider people we’ve never met in person real friends. When I talk about this when I speak, particularly to business owners, they just shake their heads. It seems strange we’re making friends online, with or without ever seeing them in person. Some even make the joke their kids have 250 Facebook friends, but no one to go out with them for dinner.

Are We More Lonely?

Facebook arrived when Americans seemingly are more alone. “In 1950, less than 10 percent of American households contained only one person. By 2010, nearly 27 percent of households had just one person.”

But living alone doesn’t necessarily mean you’re lonely. I was listening to Barry Moltz interview Susan Cain last week and she talked about how half of our population are introverts. This doesn’t necessarily mean we don’t like to be around people. It simply means, while extroverts get their energy from being around throngs of people, introverts get their energy from a quiet glass of wine with a friend or reading a book. Just because we don’t like to be out every night at a rave does not mean we’re lonely.

Facebook, and the other social networks, give us the ability to “talk” to people without actually having to talk to them. When clients ask us who we recommend they put in charge of a particular social network, we always recommend they start with the introverts inside the company. Social media allows them to make friends and break the ice behind the comfort of their own computer screen, which makes them much more comfortable and productive at trade shows, conferences, and networking events because they’re not meeting people for the very first time.

The appeal of Facebook, of course, is it allows us to combine distance with intimacy. I always say Facebook is my own personal stage – I use it to see which jokes, which updates, and which photo captions people will find most engaging. I use this “market research” when I write, when we work with clients, and when we create new content. But I would never actually get up on a stage and perform. It’s not in my DNA.

The Atlantic article goes on to say, “The real danger with Facebook is not that it allows us to isolate ourselves, but that by mixing our appetite for isolation with our vanity, it threatens to alter the very nature of solitude.”

We never take a break. Human beings have always created elaborate acts of self-presentation. But now we do it before we get out of bed and right before we plump our pillows and close our eyes for eight hours. Yvette Vickers’s computer was on when she died. It stayed that way for a year and no one noticed she wasn’t commenting or participating in the conversation.

I don’t know. I’m torn. In one sense, I think Facebook feeds our need to be social and in the other, I wonder if all this technology and accessibility really is making us more lonely.