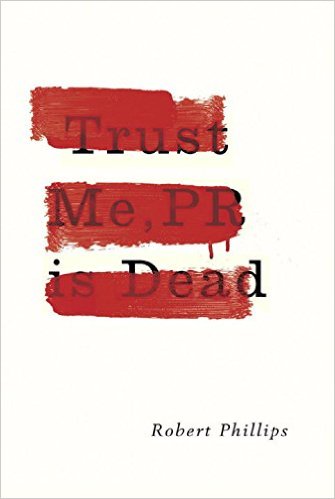 Last month, we had Fred Cook—the CEO of Golin—in this very hot seat.

Today, I am pleased to introduce you to Robert Phillips, who spent time as the CEO of Europe, the Middle East, and Africa at Edelman—the world’s largest (and private) PR firm.

To say he’s a big hitter is putting it mildly.

But one day, he up and quit his job.

In his words, he “no longer believed in what he was doing.”

He says, “Messages can no longer be managed. The age of spin is over.”

What You Will Learn

He has a new book out, Trust Me, PR is Dead, in which he denounces the profession because it is “so seemingly unaware that it is experiencing its own death throes.”

Though the book has been met with some criticism, the issue most have is with the title itself.

Robert says the same things we say here—the industry needs to evolve, things have changed, it’s time to embrace the new and get on with it.

But, he also paints the industry as being interested only in consumerism, manicured messages, and making money.

It’s going to be a really interesting conversation!

So, get your questions ready, and grab some Gatorade (you’ll need the sustenance). Our author Q&As go at a fast and furious pace and you won’t want to miss a second.

In order to participate, all you have to do is:

We’ll be here for an hour so you can join us the entire time or step in and out during the hour. It’s entirely up to you; just make sure you’re here before 12:59.

Those of you who participate in today’s author Q&A with Robert Phillips (even if you’re late to the party, but not if you’re an Arment Dietrich employee) will be entered into a random draw for a free hard copy of the book.

Don’t forget—you have to actually leave a comment, ask a question, or participate in the chat to be entered in the draw. Otherwise we won’t know you were here.

Get ready with your questions and join the conversation. And don’t fear! If you missed the live portion of this, we’ll keep the drawing open until midnight PT so you still have time to get in your questions.

I think it’s time to retire this series. We don’t know, yet, what will replace it, but stay tuned.

And, if you have any ideas, we are all ears!