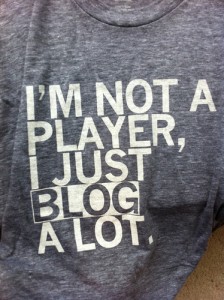 A few weeks ago, you may have seen a very sly mention of the very first blog post written for Spin Sucks (which was published at 11:35 p.m. and we wonder why no one read it).

I almost hate to mention it again because it was so bad. But I do so because, as of September 11 (yes, the anniversary), we have been blogging for six years and I thought it’d be interesting to take a look back.

You see, as human beings (particularly in America where our society honors the great achievements), we tend to look at success and think people got there overnight. For some reason, we also think successful people must put their pants on differently or have clones or somehow have more hours in the day than the rest of us or don’t need to sleep or maybe even are cyborgs.

Americans also have this really weird idea that they’ll get rich quick or lose weight fast or truly become an overnight success.

When, in fact, none of that is true.

We’re all people. We all make mistakes. We all have failures. We all screw up. And we certainly don’t get rich or lose weight or become successful overnight.

To prove my point…Spin Sucks is not, by any stretch of the imagination, a Mashable or a Huffington Post or even a Dog Shaming (which I’m totally going to get Jack Bauer on one of these days). It’s not even my sister’s blog, Pintology, that has 20,000 monthly views in its second month of existence.

But, for a niche blog that speaks to PR and marketing pros (and some entrepreneurs and one insurance guy), it does fairly well.

But it didn’t start out that way. In fact, the first couple of years – like the very first blog post – were a disaster.

I’m a numbers person who looks (and acts) like a communications pro. Some of you already know that about me so it won’t come as a surprise that we keep meticulous records on the stats.

That said, we (cough, I, cough) had no idea about Google analytics until July 2008. So we had nearly two years of blogging without knowing how we were doing. It’s probably not a big deal because the first two years were such a disaster.

I’m glad I haven’t done this exercise before now. I probably would have been discouraged and walked away from blogging long before 2010, when we finally got our groove.

Some of the lessons won’t surprise you because I’ve blogged about it parts of it before.

So there you have it. Six years of blogging lessons and stats. I wonder what the next six years will bring?
P.S. If you want to buy the shirt in the image above (I have one!), click on it! It’ll take you to the site.
Tweet
Share
Share
Pin