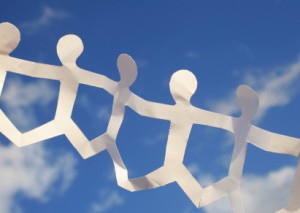 The night is late.

The sign reads “Blondie’s Wet Spot Bar” and I am seated between two very handsome men.

I probably do not need this vodka in front of me, but Bacchus needs appeasing.

There is a taqueria. We came here on the BART.

I really do not know where I am.

This is not unusual for me – I often do not really know where I am, or even when I am. Life on the road.

We began the evening somewhere else – a patio – and some martinis, manhattans, and munchies later, we are now fast friends. We are Tribe. A casual observer would probably not guess this is the first time we’ve met.

We’ve developed our own slanguage during the last few hours. It started back at that posh bar when I presented to these fine gentlemen my version of David Logan’s Tribe TED talk. While I’m sure Mr. Logan’s version was not quite so full of profanities and vodka, the essence rings true.

I first watched that TED during The Dark Days, while I was still mired in Level Two thinking, looking to change my world. Life was less than pleasant for me at the time, and his words helped illuminate some shadowy corners of my mind. He provided me with a framework to match my own observations.

It resonates instantly with these men, thankfully, and they appreciate my nerdiness and excitement. Now with a common vocabulary, we start analyzing the blogs we read, the people we know, and our own selves.

We all know examples of all levels. We’ve all done our time in the lower echelons. Yet we now find ourselves moving upwards.

It is no coincidence the unifying force for our trio is none other than Gini Dietrich. We “met” here in the comments of Spin Sucks, a solid Level Four Tribe, with intense bursts of Level Five. We discuss how G embodies this concept, the idea that surrounding yourself with strong, smart people makes you stronger and smarter. The Upward Spiral.

We’ve all felt it. G has this almost prescient way of reaching out to people right when they need it. She knows when someone is on the cusp of one Tribal Level and lifts them up. Changes lives.

A gleam in Joe’s eye says he’s about to say something marvellous. With a scampy grin, he says “We are Levelling Up.”  It is so perfect, so true. And we all have Ms. Dietrich to thank for being the catalyst.

The second most popular question people ask me is “How do you deal with so much constant travel?” Nights like this one are key to my survival, to my success. Yes, I miss my friends, my dogs, my bed. My family most of all. But being in San Francisco, talking intently with two such brilliant and kind people as Dwayne Alicie and Joe Cardillo makes it all worthwhile.

Thank you, Joe and Dwayne, for such a mind blowing evening – and I encourage you all to watch David Logan’s TED. I’d love to know what you can do to Level Up.

Me, I am going to follow our fearless leader Gini. I will keep meeting amazing people who push me to be a better RAT. People who know that their own self-worth doesn’t reply upon someone else being lower than you.

From now on, I am going to associate with those that lift me up.